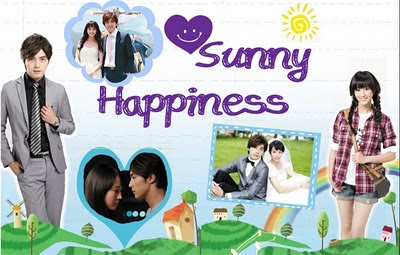 This drama is the first TW one I've watched in a while. Generally they're either so cheesy, fake, or badly acted that I can't sit through more than the first episode, but Sunny Happiness showed enough strength, especially in its first half, to inspire me to near-addiction levels. Sadly, this tapered off once the typical drama mechanisms of noble idiocy, useless time-filler scenes, and annoying second leads came in.

Mike He is one of my favorite TW actors, albeit that's not saying too much. Why Why Love is a consistent favorite of mine, even if I've never been able to sit through the gruesomely convoluted last few episodes. However, I didn't care for any of Mike's other dramas because the leading ladies were especially annoying and the plots thin at best.

Li Yi Feng, who plays Yun Chao isn't particularly impressive. He's cute, but as soon as he starts talking I start losing attention. He sounds like he's reciting every line and struggling hard to "act" but without success. I don't feel any of the philosophical messages or heartfelt confessions he tries to relay simply because it sounds like I'm listening to someone read a book. Maybe non-native viewers will like him better. I do admit that he improves as the drama progresses and as his role gets larger. 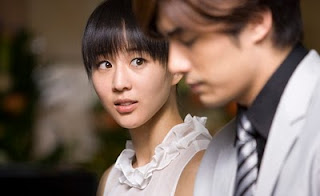 Janine Chang is someone I hadn't regarded with much positive light before, though admittedly I only saw her for a couple minutes in Honey and Clover. She does a decent job here and, at least in the beginning before the "makeover," manages to tone down her extremely pretty appearance. I could almost buy her "normal girl" character, although her acting isn't anything special in and of itself.

The other secondary characters played by actors/actresses I didn't bother to look up serve their roles but again aren't outstanding or compelling. The closest decent one of them is the one who plays Wang Lan, but I found her characterization flat and often emotionless. Her character itself was interesting and complex relative to the others, but I wish the actress hadn't recited her lines as blankly as she often did. 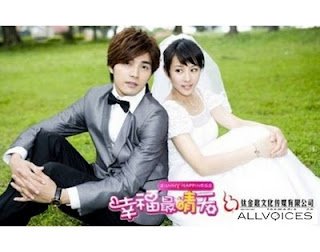 Sunny Happiness literally recycles and compiles multiple drama plots into a single story. That aspect by itself didn't bother me, as it made the plot interesting and is almost a must in all dramas these days. These plot points included the contact marriage, drunk sex, inadvertent pregnancy, rich guy and poor girl, etc. However, what did annoy me was that the story didn't dare to go beyond these plots and stayed within very well-defined lines. You get the typical marriage contract scenario, complete with "should we should we not" divorce angst and the "we won't fall in love with each other" statements.

I was further disappointed with the handling of the pregnancy issue, which was basically the whole plot of Fated to Love You crammed into 5 episodes. The lead discovers her drunk one night stand (this time after the marriage though) led to a child, then miscarries the child before showing any signs of a stomach. My theory is that drama producers think that TW viewers won't like the idea of actually begetting a child in this situation and thus kill off the unborn kid in order to restore the heroine's outer virtuous image. This would possibly have been more compelling if FTLY hadn't done the exact same thing. Is it too much to wish that the ill-conceived child would actually come to fruition? I felt almost cheated when they pulled out the miscarriage device, as it seemed a cheap way to add dramatic tension and temporarily cut off the main link between our two leads. Oh yeah, and not have to deal with the costume issue of mid-way pregnancy. 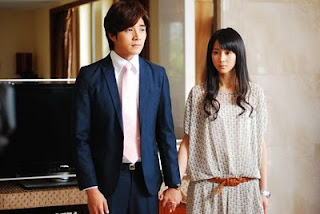 For me, the story reached its climax at episode 17 (Chinese version) and then tapered off from there. 18-24 are essentially repeats of the same arc - the heroine tries to be noble and refuses the hero's advances, the second leads grow increasingly more annoying and take up valuable screen time despite us knowing they have no chance, and random scenes of baking and corporate drama are weaved in to fill up the hours. This pre-ending lag is always my least favorite part of any drama; I wish someone had the guts to do away with it or to write in some actual, realistic tension or development. I almost put the drama on the shelf then, but forced myself through it. 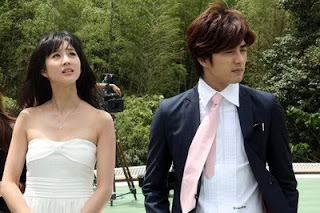 The leads had cute chemistry, but nothing out of this world. Sure they had a bed scene, but that was about the high point of chemical appeal. They look cute together, but then again, with people as gorgeous as Mike and Janine, how could they not look good when put side by side?

The second leads had about zero appeal. I'm sure many had a semi-crush on Yun Chao, but for me, he was nothing more than a character created to add controversy and fill up the triangle from Yong-Yong's side. He enters the game too late for us to ever think he'll have fighting chance for the girl, and frankly is a very selfish and unappealing character. I can sympathize with his sufferings as the second son and as the one who won't get the girl, but the story never makes me like him, as he's rather boring and very stereotypical. Also, it made no sense to me how in one episode he was like "I'm willing to wait decades, even centuries for you to like me" to Yong Yong and then in the next "I've decided to give up." I was happy about the latter development since it was like FINALLY you'll stop interfering with our OTP, but also thought it a bit pathetic and self-defeating to say that so soon after the first. It kinda made the first words seem much more meaningless and empty. 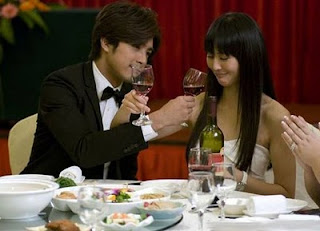 The ending, however, is very sweet and definitely cute. It put a smile on my face, but the sad thing is that I was already pretty checked-out of the story by then and had no real emotional investment in the characters. I knew they would ultimately end up together, just as I knew the second leads would miraculously go from close-minded lunatics to graciously cooperative and independent people. Its just the way dramas like this work- no divergence from the norm, no surprises to keep me more than superficially hooked.