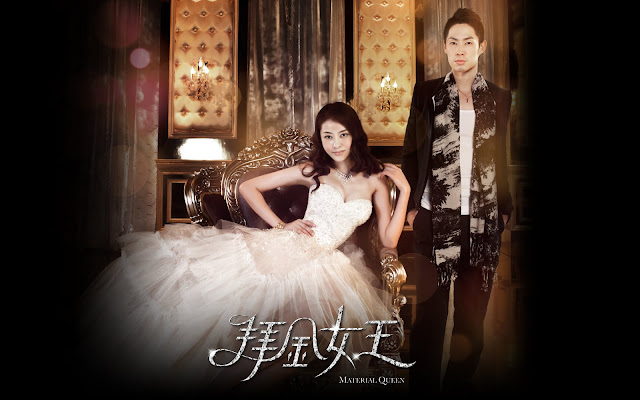 Material Queen has aired 14 of its planned 20 episodes so far, and this is probably the show that I've had the most conflicted reaction to. I love the heroine but hate the male lead, the plot is predictable yet oddly addicting, and it makes me so frustrated that I want to keep watching.

MQ builds on its premise of a gold-digger who falls in love with a poor violinist. Only in episode 11, this entire plot gets thrown out and "rebooted" in a rather predictable opposites fashion. I can't say whether I really like this change or not. On one hand, the gold-digger story was getting old, but on the other, I absolutely loathe the male lead now. Usually I start hating the female lead at this point due to pointless stubbornness and manufactured angst, but in MQ the entire source of trouble is from the guy. Chu Man, our heroine, is actually incredibly likable, even in her moments of bitchiness in the first half. I think it's because the story bothers to spend time delving into her thinking and creating her as an entirely understandable character. Lynn Xiong is also doing a remarkable job in acting the part.


Unfortunately, our guy, Cai Jia Hao, played by Vanness Wu, goes from naive, unsexy nerd to still unsexy jackass. I'm sure a large part has to do with how the character was written, with his cheesy lines and frankly terrible personality change, but I'd say an even larger part has to do with substandard acting from Vanness himself. Some people like him for his abs, but honestly he reminds me of a snake, an impression I was willing to overlook in Autumn's Concerto but which has now resurfaced via a sludge of mediocre acting and awful characterization. It's made even worse by his new mile-high hair, which simply looks like he's trying to gain some height over the tall Lynn in the most awful 80s way possible.


In fact, I hate his character so much that it's partly the reason why I'm writing this blog post. Everything else about the story is rather unremarkable. It's rife with cliches, from the poor people fighting against the rich for their land (used in about every Taiwan drama in history) to the girl falls for poor boy (I still can't understand that), the manufactured misunderstandings, and the rather hackneyed circumstances change in the second half. I'm not sure how Chu Man went from kickass to almost pathetically pining away for a guy that really doesn't deserve her within pretty much the span of one episode. I expected a bit more self-reliance at least, even if she is falling in love for the first time.


So, let's elaborate on why I hate Cai Jia Hao. First off, he's whiny, pathetic and like a geeky stalker in episodes 1-10, resembling a puppy crying for attention far more than a besotted man. Then in 11 he starts being a stupid, full-of-himself idiot who refuses to hear reason and wallows in self-pity. He makes the idea of a poor person becoming rich seem like an awful change. Rather than using his money for good (like buying his sister a new place - instead she's shown being ignored and left behind in their impoverished lifestyle) he uses it to flaunt his status and be a jerk to Chu Man. I'm also not entirely sure a violinist can rise to that level of celebrity fame as shown in the drama, but I'll try to hold my skepticism.

He does unforgivable things to Chu Man in 11 and 12, things designed to humiliate and insult her. Honestly, no matter how much she supposedly loves this guy, at some point the girl needs to accept that he's become a jerk and doesn't deserve her feelings. He basically caused her to waste two years of her life, and doesn't so much as try to understand the extensive sacrifices she's made on his behalf. In fact, the truth could be shoved down his throat and he'll still find a way to ignore it and make excuses for being mean.

For example, in episode 14 he's presented with irrefutable evidence of her true feelings and finally does something that made me think "at last, he can be a decent hero again!" And then two seconds later, what does he do? Run away to his car and drive off, leaving her standing alone again. Despite understanding everything. I really, really wish they weren't our OTP and Chu Man could go find some better-looking, more well-created character (like Danson Tang who appears in the next episode - so smexy in a way Vanness never will be, but sadly wasted on loser character number 2 in the series- Yi Xian).


Lastly, I hate Vanness's acting. I keep imagining someone like Jerry Yang (who was originally slated for this role) in his place and am just certain that I wouldn't hate Cai Jia Hao so much if it were him instead. For one, Jerry just appeals more to me. But besides that, Vanness does this shrill screeching thing in MQ whenever he's mad that makes me want to punch him. He's also terrible with displaying emotional subtlety- everything on his face is an extreme version of whatever emotion he's supposed to feel. I don't recall him being this repulsive in Autumn Concerto, so it seems he's regressed in acting talent and appearance. But I do remember him pulling the same over-the-top acting in Meteor Garden 2 (with that lame cello story line), which started my hate for him. Years later, the hatred has been renewed.


I have read that Lynn and Vanness hate each other in real life, and while I'm also not certain if this is rumor or fact, I could understand from Lynn's side why. I would also hate having to act like I'm in love with Vanness's character, made 20000x worse by his bad acting. He has forever the connotation of jerk in my head now. Perhaps this is why Jerry didn't accept the role.

I will follow MQ to the end, because it is a beautifully shot drama and the music is excellent (although overpowering sometimes) and Lynn is perfect. The clothes are also to die for, so any fashion-obsessed lady should take a peek at this. However, I'll need to do my best to ignore our stone-acted and ill-written male lead, and perhaps try to give Vanness the benefit of the doubt.
Email Post
Labels: dramas Material queen Series updates Taiwan