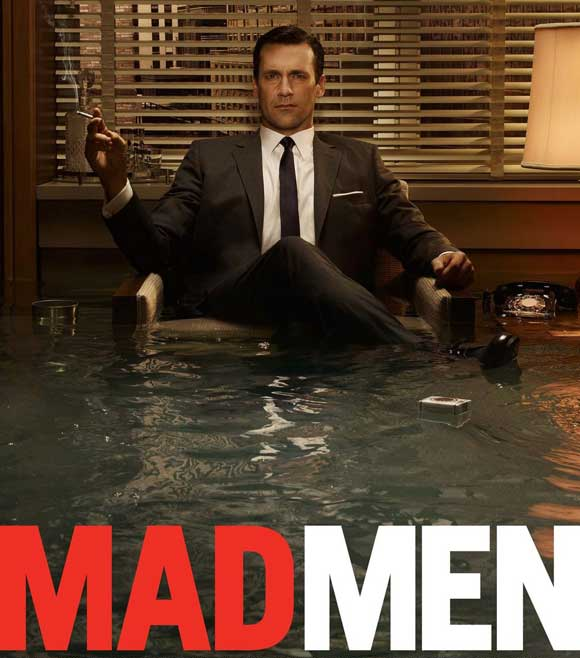 This isn't my typical drama post, but lately I've been finding myself taking much-needed breaks from the angst and formulaic structure of K-dramas to enjoy various American shows. Mad Men just has so much discussion fodder that I couldn't resist doing a post after recently finishing season 4.

I actually started season 1 a couple months ago, and have since sped my way through the rest of the aired episodes. It's a pity they ran into those negotiation issues with season 5, because I'm eager to see how the remaining 2 slated seasons will proceed with the established story.

For those new to the story, Mad Men follows the life of Don Draper, an advertising man in 1960s Manhattan. Other key characters are Peggy Olson, Don's former secretary and current copywriter, Joan, the always sexy and composed office manager, Betty, Don's pretty but slightly psycho wife/ex-wife, Roger Sterling, a playboy and reluctantly-aged founder, and Pete Campbell, an account manager who has a love-hate relationship with Don. 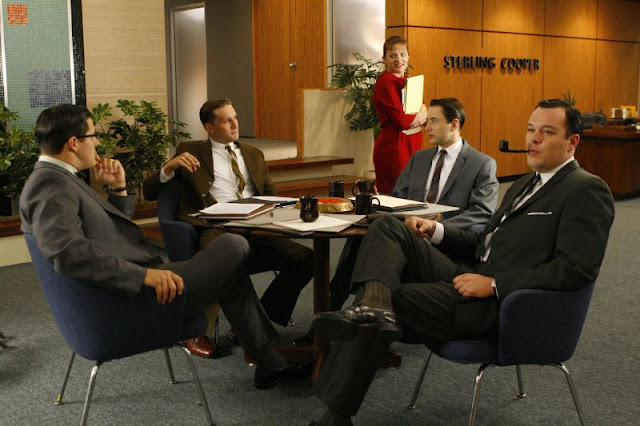 Seasons 1-2 weren't actually that good or engaging to watch. It takes a while to build up the characters, and some, like Peggy and Joan, are written in a limited way that belies how awesome they become in the later seasons. We also have too many uninteresting conflicts. In fact, I hardly remember any plot point from 1-2, except for the expository ones on Don's background. Or maybe it just gets better because the characters become more complex later on.

Seasons 3-4 were fantastic though. So many meaningful things happened, from Don's divorce to the start of the agency. It tied seamlessly with the earlier seasons, but also added an extra layer of depth and interest.

I am in love with how rationale and true-to-life the characters are, even if I don't often like them. They each have inner quirks and personal beliefs that are consistently expressed through their actions and words. For example, Peggy is the outwardly innocent girl who from the start wants to become desirable and successful. Betty suffers from some pretty deep-set issues, including a dissatisfaction with life that carries through the years. 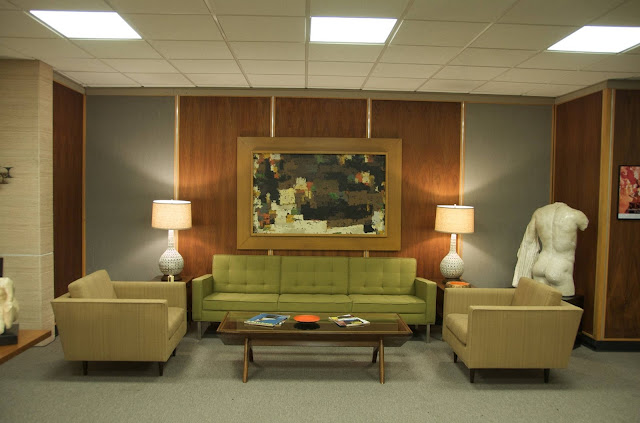 Going along with the character intricacies is how real the set environment feels. Unlike some cheap dramas where you have to suspend disbelief as you watch certain physically improbable situations play out (i.e. someone drowning in 3 feet of water), Mad Men does a great job of making sure every detail is correct, from wardrobe to furniture and even knick-knacks. It's a combination of a generous budget and careful editing/directing, which more shows could certainly use more of (the latter especially in most Asian dramas).

Below are my reviews of each character: 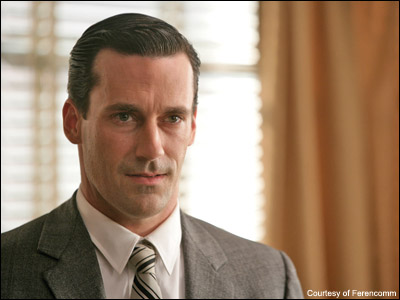 I wonder how many female viewers actually like him. He's kind of a cheating scumbag, with a libido that obviously knows no bounds within the female sex. Young, old, pretty, not-so-pretty - Don's done them all, and with a righteous attitude and hairy chest throughout. Jon Hamm looks okay, but I certainly wouldn't be swooning at his feet. If prudish, dark-haired, middle-aged men were the hot thing in the 60s - I'm glad I don't live in that era.

The actor is terrific though. He did an especially great job in Season 4, which certainly warranted the Emmy win. In the earlier seasons I felt like he was skimming by a bit on lavish filmed speeches without having to display much actual emotion. Luckily that's improved, and I actually sympathized with Don during parts of season 4.

He makes an admittedly interesting focal point for the story, so even if I don't like him all that much I can tolerate and understand his presence. 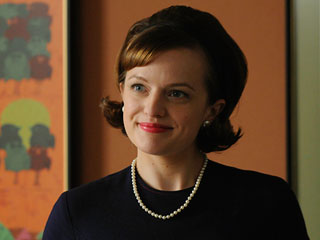 I'm not entirely sure I like her either, which is a pity. She has all the makings of a cool heroine - strong, self-sufficient, driven, witty. But she's also got this moralistic, snide attitude combined with this trying-too-hard character arc that stops me from fully sympathizing with her.

I really thought Elizabeth Moss was fat in season 1, which I suppose is great because it meant that the fat suit and makeup didn't look fake. Then of course the truth came out and in season 2 she was stick skinny again. It's great that she's looking more well-groomed lately as well.

I didn't get the hidden pregnancy tripe, and that's among the reasons why I disliked season 1. For a show that does so well for the most part at being believable, this was a massive sinker of a plot line. And for what purpose? It's been almost completely thrown out since - the baby was put up for adoption so we never see him again, Pete has his own kid with his wife now, and Peggy is very adept at forgetting that portion of her life.

I do trust the writer, so I suspect it may play into the later seasons, but for now is a fail of story. Peggy simply isn't written to be so ignorant, naive, or disturbed to the point where she could miss an entire 9 month pregnancy. I've read comments online defending this, written by people who say they apparently heard of women that had this happen to them - but I scoff at that. Self-denial, really? This isn't looking in the mirror and imagining yourself as beautiful - this is literally not missing your periods, not realizing you have morning sickness, and not seeing that your stomach is swelling into a melon. Whatever, writer. 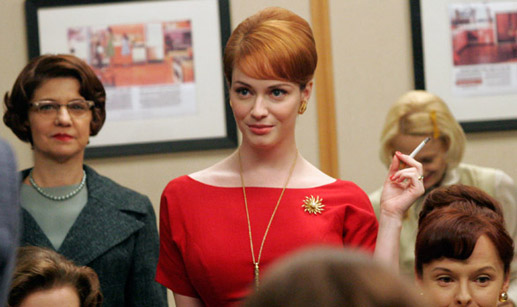 Here's someone I actually really adore in the show, despite her description sounding like a giant turn-off. High and mighty in attitude, with provocative dresses (by 60s standards), and fast with the retorts. But Christina Hendricks plays this rather prickly character with such class and sense that I'm fairly certain it's impossible for anyone to dislike Joan. It's helped by the fact that Hendricks is gorgeous and season 4 really took the time to expose her inner vulnerabilities. 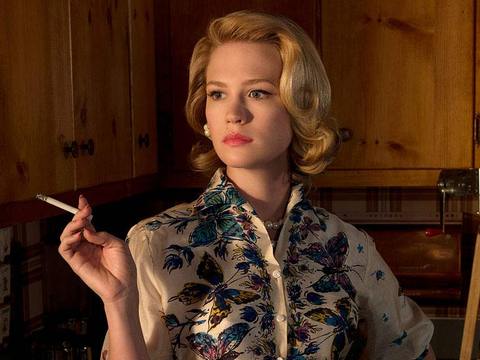 I genuinely liked her in season 3, but after season 4 kind of hate her. She's got some obvious issues, and is ignoring them while acting like a bitch on stampede. I feel sorry for her kids and even more sorry for poor Henry, who's such a kind, awesome guy (one of the very few in this show).

Seasons 1-2 were all about putting Betty in the most number of dresses, earrings, etc. so that January Jones could wile affection out of male viewers and make female viewers drool over her outfits. Season 3 didn't try as hard and focused on her character rather than her appearance, which is partly why I found her so much more appealing. Season 4 has made her into a source of all evil. I like watching her though, as she always promises entertainment and psychological exploration. 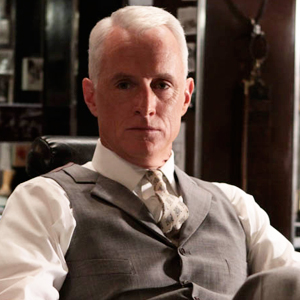 He's an interesting mixture of hilarious and pathetic. His lines are among the most insultingly fun, but his character situations are some of the most sad (i.e. heart attack while playing with teenage girls). My opinion of him is similarly mixed. I like him for the most part, but then in season 4 he became a bit of an annoying coward. 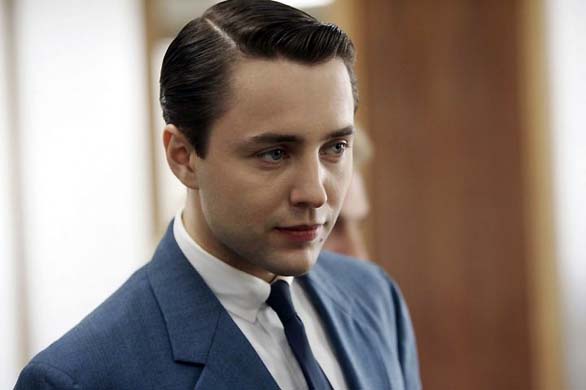 I like him. Pete's a sensible, ambitious guy who tries really hard but is often shut down. He's very real in that sense. I also like watching his interactions with Trudy, because they're a pretty cute couple. Whenever he and Don would tussle, I generally find myself rooting for the former, because the latter is usually being a self-obsessed asshole. 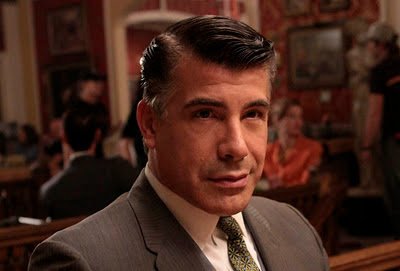 So what happened to Salvatore? His repressed gay story arc was one of the shining points in the first 2 seasons, but then the writer decided to throw him out without a word and nary a resolution. I'm annoyed. There was so much potential story material in that piece, and what a waste to just put it in the shredder before it started getting good. 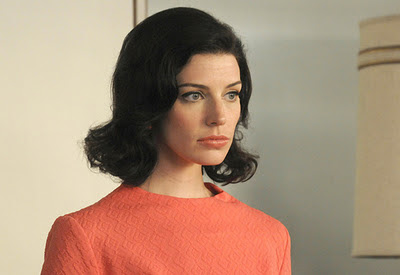 Megan: Who really thinks she and Don will end up together in the long run? I'm surprised the writer actually made a point to mention her large teeth, because they really were getting distracting. I think she's a nice person, but really don't care enough about her to watch much. It feels a bit like the Jane-Roger romance, only less fun because this is the uptight, crabby Don rather than the light and hilarious Roger. 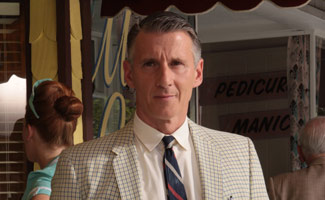 Henry Francis: Poor guy, choosing a disturbed lady like Betty as his marriage partner. I really loved all his scenes in season 3, because he was so dashing and sweet. I fear that he's in for a lot of heartache in the coming seasons. 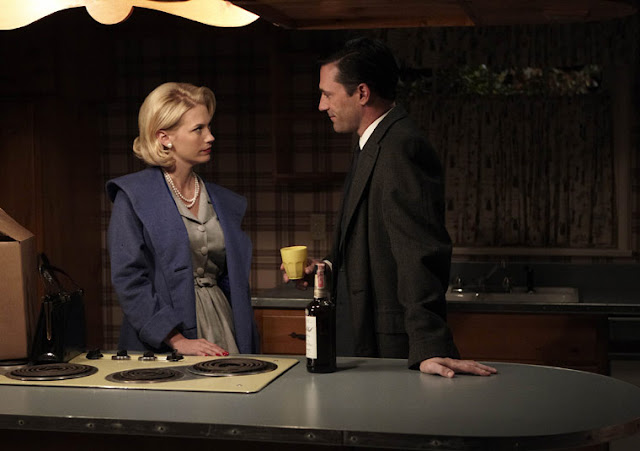 Season 4 ended with a strong bitter taste from our two male characters, Roger Sterling and Don. The former becomes a selfish, incompetent man, while the latter man-whores himself to shame.

For the ultimate series ending, I'm actually supportive of a Peggy-Don relationship. There's pretty much no other woman around that understands Don as well as Peggy does. It's also clear that she has feelings for him (i.e. their solo work night in season 4, plus her subtle jealousy at Megan), and very clear that he holds great respect and fondness for her. I don't think the Megan thing will work out for long, because it's such a rushed and undeveloped relationship. She seems smart, but I'm sure the demons will come out once 5 airs. And once that clears, P/D can take the lead. I imagine it won't develop until the final season, if at all, since Don likes to wade through women and the production couldn't possibly make us watch him turn monogamist for long.

The other possibility is that Don's desertion gets outed and he ends up in jail. It'd be depressing, but probably realistic. Regardless, I'm excited to see what's to come.
Email Post
Labels: American dramas Series review