Why I won't finish these dramas 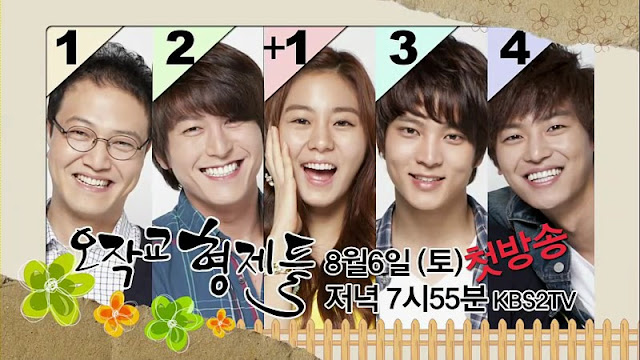 A number of new-ish shows came into my interest radar lately, from rave reviews and/or pretty packaging. But alas, I find myself unable to complete many of them, which makes me rather disappointed. Lately it seems that not only has my internal (and sadly unstoppable) nitpicking of drama plots and characters worsened, my incentive to finish those that I'm not 100% satisfied with has completely vanished. Certain stories only give me high blood pressure and a sense of disgust from either awful characters, insipid plots, or visual lack of appeal. Rather than increase my stress unnecessarily by sitting through them, I call it quits early now.

Here's the list of dramas I recently tried starting/returning to and just couldn't continue for the sake of my sanity: 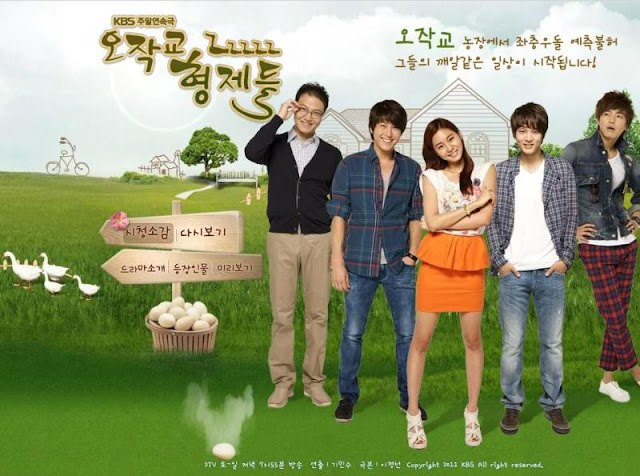 I really like the premise and idea of the pairing in this. Not that UEE  or Joo Won were at all my favorite characters in their respective previous dramas, but I enjoy their individual charisma and the idea of the "villains" finally taking the lead in something. UEE looks gorgeous in this too, a far improvement from her bitch-central appearance in You're Beautiful.

But man does this story have a pain in the ass load of angst and stupid characters. From the almost 4 episodes I watched, I HATE the parents and find almost all the brothers irritating on some level. The father - talk about an idiot. I'm usually pretty tolerant of mistakes, but the problem here is that even after it becomes clear from his sons that what he did was cowardly and wrong, he refuses to own up to it.

Instead, he sits there pouting and yelling back at them, making excuses for himself such as "I only wanted to give her a year of happiness" and going on to paint himself as a noble hero who is somehow an unfair victim. Reality is, he's a victim - of his own stupidity and lack of ability to face the true situation. There's no freebies in this world, especially not with a valuable piece of land. The only explanation I can draw for his behavior is that he secretly hoped his friend would forget or disappear and thereby enable him to receive a large property with little to no exertion in acquiring it. Pathetic and sickeningly lazy. The actor who plays him just made it 10x worse. He's fine as the bumbling father, but once the anger comes out, I see nothing but a hideous, fat caricature on screen. He's as physically repulsive as he is mentally weak.

And the mother - I'm sure I haven't even seen the worst part of her yet, but everything I've watched so far is pretty darn trashy. She lies to people's face (case in point, the duck egg selling scam), schemes behind others backs (i.e. selling the ducks to a restaurant without letting the ahjumma know straight out), dares to SMILE upon hearing that the farm owner has probably died, and always sounds shrewish and screechy. I also have this pavlov conditioning when I see her face to cringe - after all, wasn't she that psycho mom from Bad Guy? 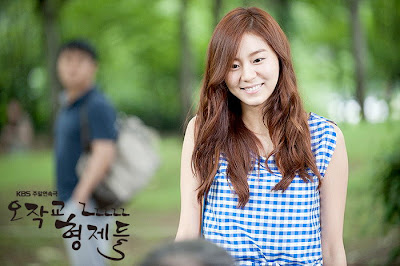 Moving on to the brothers - I'm not interested in any of their mundane love problems, because they're almost all as annoying as the parents so far. The eldest is kind of endearing, but I don't care for his neighborhood ahjumma love line. The second seems like a tool, and for some reason I've never warmed up to the actress playing his leading lady, who's always just lacking something in terms of screen presence (first saw her in Bad Couple, where she acted so stiffly it was comical, then couldn't stand Manny because of her personality-less). 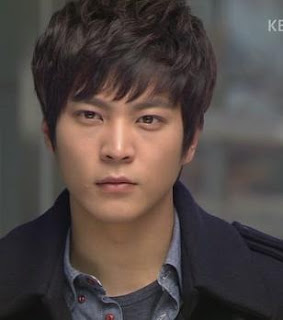 Joo Won and UEE were the only reasons I ventured into this, but unfortunately their first interaction via the mistaken arrest was a giant turn-off. She was fine, but he was a jackass. It's one thing to be slightly rude, quite another to go around as a police officer and shove / essentially abuse a girl. It worked in Joo Won's favor in Baker King where he was meant to be a bit of an ass, but here it seems incongruous and utterly destroyed the appeal of his character. I don't support rude, selfish heroes, unfortunately.

And the youngest of the four? Talk about a fluffy, useless little baby. I don't understand his purpose at all to the story, aside from serving as mom's boy toy. The acting for him is also incredibly subpar, with zero substance or flavor. All the actors playing the brothers leave something to be desired.

So yeah, O Bros is definitely not for me. Maybe in another life. 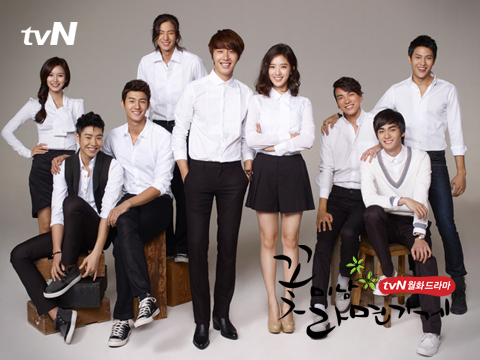 The premise again is so cute. I love flower boy roles in general, and what could be better than ramyun? Yet sadly, the cards didn't play out here. I'm somewhere in episode 4 now, but literally had to force myself through the past 2 episodes and couldn't stand another minute. 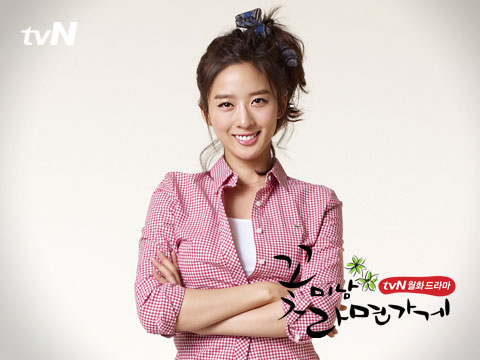 My issue here is with the heroine more than the hero. While I'm not a huge fan of Jung Il Woo, I'll concede he's actually ok as the spoiled brat kid here. He's a bit OTT all the time, but it kind of works with his character. Eun Bi, on the other hand - SO ANNOYING. She goes hot and cold continually and without reason, running from anger rampages to whiny tears. The acting is so overdone that it literally makes Chi Soo look like a normal boy. 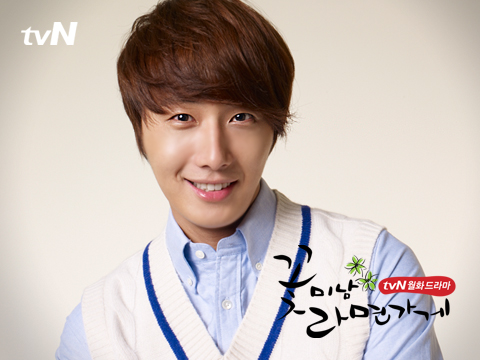 Something about the actress just isn't quite getting to me either. She's pretty, but in a stickly way, and always has a bit of an idiot look on her face. I prefer halfway intelligent heroines over brash and slow ones, thank you.

The side characters, from Chi Soo's girlfriend to that other little gangster boy are also horrible stuffed side-people that lack even an ounce of realism or appeal. Either be all the way nonsensically funny (such as History of the Salaryman) or just be a normal person, don't give me this wishy washy not-really-funny-but-trying-to-be thing.

Also of note, everyone except Chi Soo here kind of grosses me out. I mean, we meet the lead girl after she's taken a dump of all things, so whenever I see her face I kind of imagine the constipation/other issues that eating so much ramen would probably cause. For the second lead guy, we see the lead girl sniffing some sock he left out and making a face - uh, disgusting much? Clean, sanitary people please! 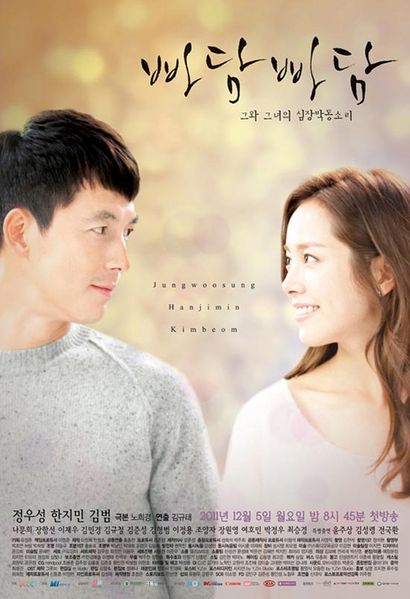 I'll still say this is a good drama. I'm in the midst of episode 5, but just can't find the desire to continue. They're starting to pull in too much bitchiness from the side characters, as well as spending a lot of screentime on the dad with his detective skillz. No. I have zero desire to watch that kind of crap. We all know an angry confrontation is only a matter of time in coming, and with my low-stress drama policy, I'm just not in the mood to get worked up over fictional characters.

Kang Chil and Ji Na continue to be cute, but it's also clear they'll be staying this way for the duration. Build-up fun over. In fact, the only area of interest now is Kang Chil and his son's relationship, which I still think holds the most potential as a moving storyline. But that alone isn't enough of a motivation to endure 11 more episodes.

Quality drama, undoubtedly. But just not my thing right now.

So I guess there's really only 3 that I've definitively stopped watching. Here are the ones I have on hold:

1. Sign
2. Baby-faced Beauty (I'm admitting that I'll probably never get to this)
3. Me Too, Flower (I swear I'm going to marathon this thing. Still stuck at episode 11 right now)
4. Boku to Star (will also probably not get to this)

And the one I've recently started and like so far:

1. History of the Salesman (not very far into it, but adore the quirkiness)

Can't wait for Wild Romance to get subbed. May also check out MoonSun, but sageuks without PSH sound like a tiresome thing.
Email Post
Labels: dramas Korea rants