There's only one reason why I sat through this movie: Ji Hyun Woo, our to-die-for time traveler, who has apparently been in K-ent long enough to be starring in movies, yet a virtual unknown until now. And I think I know why. He's definitely always been cute enough to be lead guy material, but his non-In-Hyun projects have been, well, rather tasteless things. This film is unfortunately no exception.

As a general rule, I find most Korean movies to be slow, awkwardly edited, and generally BORING. Which doesn't make sense, because if they have enough ideas to make superb 16-20 episode dramas, shouldn't their movies be more top-notch? But nope, with the rare exception of some cutsie rom-coms like Hello Schoolgirl and 100 Days with Mr. Arrogant, most all of the K-movies (and in general all Asian movies) I've watched are simply forgettable. Mr. Idol is one of them. 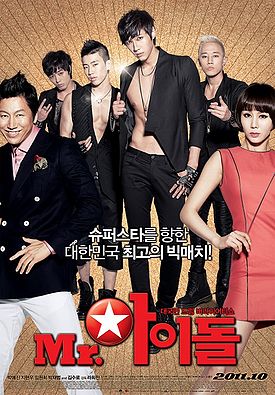 The premise is quite interesting, about a hardened woman determined to remake a former fallen band, by finding the ideal lead singer. But the execution and acting are a mess. Park Ye Jin was apparently told to not make a single facial expression or to speak with any enunciation through the whole thing, which she follows to the dot. The movie consists of her (with the awfullest crazy fro-bob haircut known to woman) deadpanning about, shooting orders tonelessly and staring blank-eyed at the screen. I think the intent was to make her seem cool, but there's a line between cool and soullessly boring me to death.

Ji Hyun Woo was better, as he played the lead singer, Eugene, and basically served as the sole pillar of light in a toneless, dead movie. Seeing him in lovely tuxes, dancing and singing was odd but incredible, and I recommend watching some if you're a fan. However, his character is also pretty bland, as he had almost no lines and was offered a bare-bones type of story.

What I really don't understand is how his character could have even come close to falling for Park's, because frankly the woman looks like his aunt, and had all the charisma of a lamppost. Yet fall in love they apparently do, and very awkwardly at that. They share a drunken peck on the lips and a quiet glass-picking moment, and suddenly they're running after each other in airports and whatnot. I don't get it, and compared to the chemistry he has with Yoo Inna, this was like watching a joke of a farcical romance.

Both the script and editing were really strange in this film. Nobody had more than a handful of lines, and all lines are one-note and flat, without any essence of conversation. It's like "Go do this" and "I think this" before the scene cuts out. And while I initially appreciated how the film didn't dwell on any scene or story piece too long, it started to get strange because one thing would happen and then we'd immediately be whisked to the consequential next scene. I think movie directors in Korea need some serious help, as I've seen this before. It feels like a cheap indie movie, only this was supposed to be mainstream.

It was also disappointing that the other boy band members got only about one line each, so nobody is really developed enough to where we really care. There was also only one song in the OST (Summer Dream) which was played out to death, and frankly very cheesily sang and danced to.

I'd give this movie a C and warn you not to waste your time, not even for our dear Boong Do. BTW, the poster is a total lie - NOT ONCE did he go shirtless.
Email Post
Labels: Korea movies