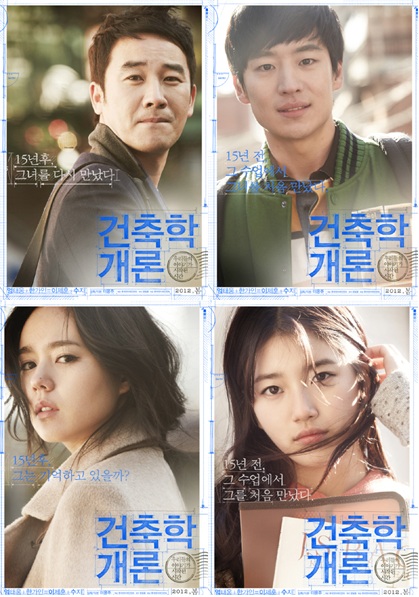 Intro to Architecture is really two movies in one - the first following the reunion and budding relationship between the adults, played by Han Ga-In and Uhm Tae Woong, and the second of their personas 15 years ago, played by Suzy and Lee Je Hoon. Both are bittersweet tales, and play out in the typical snail-paced, minimal dialogue way that most Asian movies do. As you might expect, there are plenty of misunderstandings paving the way towards the 15 year separation, along with the natural barriers to their reunion in the modern day. I loved how gorgeous the film looks, with not only its lovely cast but also the broad sweeping angles over an ocean landscape and the almost rustic portrayal of the nineties. I was not, however, much impressed with the plot, which is strained at best and boring at worst. 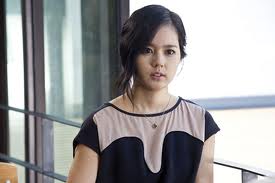 The movie opens with Han Ga-In's adult character walking through an empty room and muddy lawn, in high heels galore. Turns out she's looking for Uhm Tae Woong, who apparently pretends not to recognize her at first (or maybe he really doesn't, considering it has been 15 years). He's terribly aloof for someone who supposedly had her as his first love, and we can infer from there that something went awry.

She's apparently married (though we learn more later), and he later turns out to have a fiancee, but they agree to collaborate on the rebuilding of her childhood home. 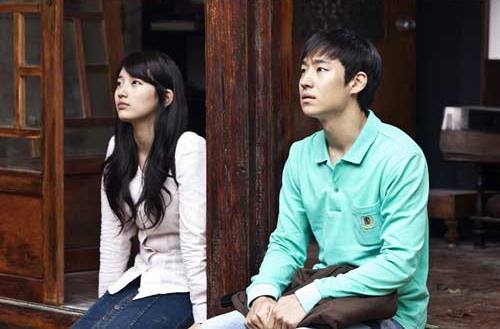 While this is all happening, we flash back to their youth, when he saw and fell in love with her at first sight during an Introduction to Architecture class. They're neighbors, and quickly become friends. He's clearly smitten, and it's adorable (and later heartbreaking) how he tries to wear his favorite shirt, a white, imitation Guess logo long-sleeved tee with the incorrect spelling "Geuss", during all of their meetings.

Her past self appears oblivious to his feelings, treating him solely as a friend to hang out with. Her modern-day self, however, is later revealed to have purposely sought him out, and to have some sort of existing feelings for him.

The movie ends without much resolution, which frankly confused me. It looked like they were setting up for one where he ditches everything to be with her. All of the scenes, from his fiancee being shown to be a spoiled brat, his reluctance to live off his father-in-law in NY, and finally the tear-jerking scene with his old mother whom he would have to leave behind, pointed towards an ending where he'd give it up and possibly even move into the new house he built with her. But instead, we get an open-ended close, where both are in the same relative place as they started the movie in, plus a beautiful new house.

I didn't care enough about the characters to care much about the ending, but it did leave me feeling a bit unfulfilled. Like really, they go through the trouble of showing us two occasions with these same two people falling in love, only to not resolve either? 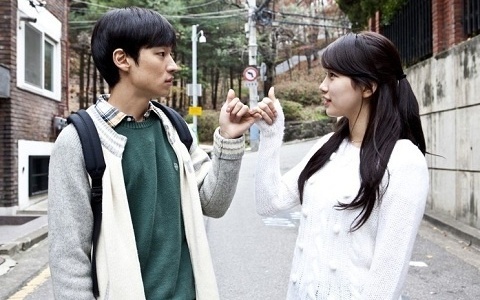 The teen sequence's ending also felt forced. Could he not tell she was clearly drunk / unconscious during the incident? Rather than peeping his ear to the door (creepy!) he should have called the cops as that guy likely had the intention to drunk-rape her (not sure what really transpired, but that's what was hinted at). His dismissal of her in the end felt narratively forced and silly, something a quick conversation should have fixed.

Otherwise, I adored his past self, for how sweet and naively in love he was. His modern day self, a cynical, angry Uhm Tae Woong, is someone I feel I just saw recently in Cyrano Love Agency. Uhm has a way of spitting out his dialogue with wry humor, and that didn't mesh with his sweet, soft-spoken teen self. I'm personally just not an Uhm fan, as most of the characters I've seen from him are rather jerky. Lee Je Hoon did bear an uncanny resemblance to him though, and I could really imagine them as the same person, 15 years apart (personality aside).

Han Ga In and Suzy look only vaguely alike, and that's stretching a bit. Both are obviously gorgeous, though I had difficulty resolving their characters. I actually liked both versions, the younger one for her quirkiness (which seems to be becoming Suzy's trademark) and the latter for her awesome wardrobe and incredible shoes (Han Ga-In herself is a bit bland in roles, unfortunately).

Overall, a decent movie and nice for a visual relaxer. Not much in the way of plot though, and don't be hoping for any neatly-closed, cheery ending.
Email Post
Labels: Korea movies