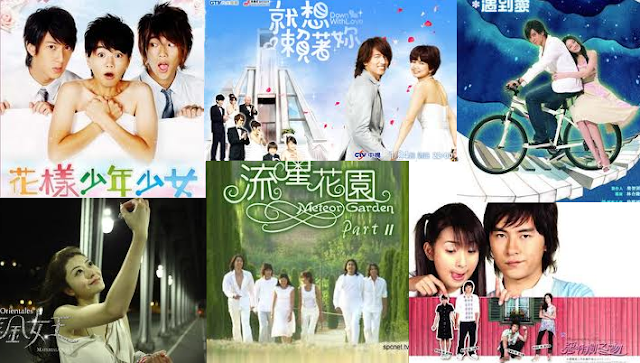 And now for part 2 of the Drama OST series, Taiwan / China. See my previous post on Part 1, Korea. Taiwan drama tracks are more deeply rooted in my heart, perhaps because I started my drama watching experiences here, and can actually understand what they're saying. Thus, you'll see the span of these reach further back in time than with Korea.

It's also the one country whose OSTs I often like even without watching the show. A lot of these are actually from dramas I either didn't like or stopped midway through, but the music is good enough to where I want to keep listening and watching.


Is this All by Vanness
Drama: Material Queen


Just Tell Me What You Want by Xiao Yu
Drama: Summer x Summer


Love Around the Corner by Show Luo
Corner with Love

When You Turn Around by Megan Lai

Loving You by SHE
Drama: Down with Love


Just Want to Depend on You by Jerry Yan
Drama: Down with Love

New Home by SHE and Fahrenheit
Drama: Romantic Princess

No Ifs by Fish Leong
Drama: My Queen


The World I Want by Kingone
Drama: Why Why Love

Head over Heels by Show Luo
Drama: Hi, My Sweetheart


The Habit of Thinking About You by Xiao Yu
Drama: Honey and Clover


Let me Sing a Song for You by Chinese F4
Drama: Meteor Shower

Let me love you by Barbie Hsu and Vic Zhou