If you're in the mood for a fluffy-as-air, mood-lifting piece, Lovesick might just be for you. Don't expect much real-world logic or layered characterizations here, but be prepared for lots of pretty, plenty of nonsense, and a less hair-wrenching view of Bolin and Ariel getting together.

Lovesick is so different from In Time With You that it's really not possible to compare the two aside from their respective uses of the two stars. One similarity is that Bolin is again the steadfast, clearly head-over-heels guy, but here he's less tortured and more just handsome and naively innocent. Ariel here is a crack-up, and I like this tough-girl side much better than the screechy, perpetually crying version we typically see on-screen. She's the girl who gets dumped by her boyfriend, mopes a bit, then stands up and decides all men are monsters and she's strong enough to live independently without them. It's fun to watch, and she pulls off hard-ass convincingly. 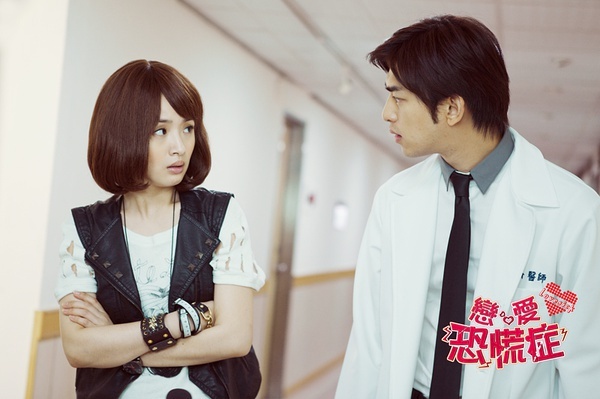 The story really starts once Bolin's character, a young, nice and good-looking doctor, runs into her at the hospital one day (literally by catching her as she slips). She leaves with a noticeable rise in heart rate, and continually is drawn to this man. She tries all sorts of pranks to reveal him as a typical low-life douchebag, but he wins out with his true kind-heartedness. It follows the standard rom-com path to a tee, from the swoony-meeting to the misunderstandings and finally the big (airport) confession and happily ever after. Seriously, nothing original, but it's perfect as something fun for a cold winter day.

One thing that may take getting used to is the filter used to film this. The drama looks and feels like something straight out of a dream. There's this cloudy haziness to everyone, which smoothes away lines and leaves only pure prettiness on the screen. Ariel already has great skin, but the difference was prominent on Bolin. I never found him immensely attractive before, but the light filters really enhanced his princely-appearance. It does make it even more evident that you're watching a made-up story though.

Going along those lines, all of the side characters are similarly nonsubstantial exaggerations. Ariel's ex, played by Li Yi Feng, only shows up for about 3 mins total, and displays some of the most exaggerated "cheating-douche" stereotypical behaviors. Same can be said for the doctor-lady that tries to drag Bolin away. The nurse staff and patients also serve as some Greek-chorus, singing, smiling, and oohing and aahing in the background as appropriate. Don't even get me started on the taxi-driver and airport lady, who behave is such ridiculous ways that it was like adding a cherry to the top of already-extreme exaggerations.

However, I enjoyed the hour and a half I spent viewing this, especially the lovely post-credits wedding finale (Ariel's probably sick of filming in wedding gowns by now). Bolin and her have great chemistry, made all the better for viewers that followed them in ITWY. It's light, fun frothiness, which is always appreciated.
Email Post
Labels: movies Taiwan