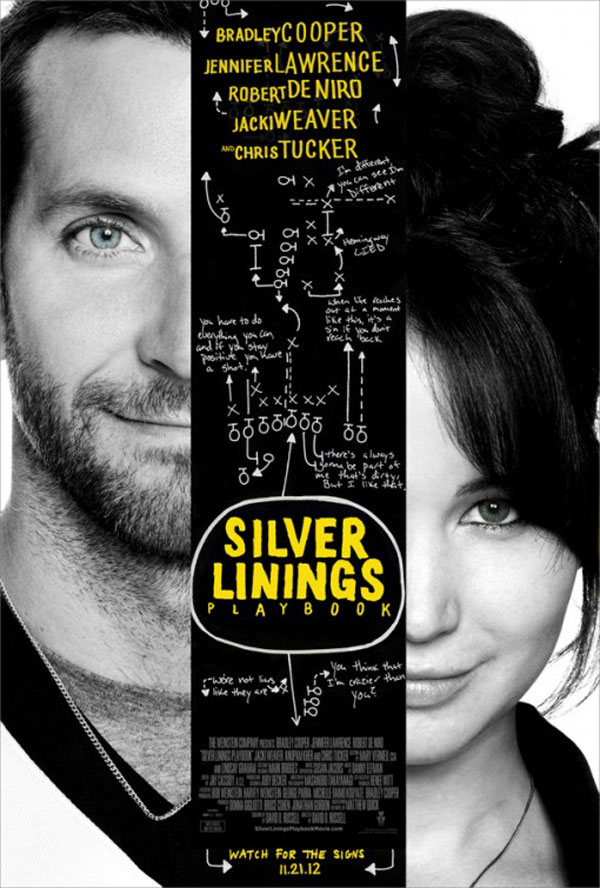 There's been a ton of buzz recently for this movie, as it's scooped up 8 Oscar nominations and Jennifer Lawrence has been on a winning streak in the award shows so far. This was probably the movie I most wanted to see this winter, as I have a soft spot for shows concerning mental illness, and heard this had some good laughs. After finally seeing it, I have to say I was pretty underwhelmed. While I enjoyed it and smiled through certain parts, I don't think it warrants all the critical (or even comedic) hype. At the end of the day, it followed and went the traditional romantic-comedy path, with a few dressed up issues that ultimately got thrown by the wayside to make way for a happy ending.

The film begins with Bradley Cooper's character Pat getting released from a mental institution, and a  quick history of how he wound up there because he almost beat his wife's lover to death. He suffers from bipolarism, with sudden flashes of anger and frenzy. The film takes its time setting him up at his parents house, showing us how determined he is to get back together with his wife, who has a restraining order on him.

One night, he goes to his neighbor's house for dinner, and turns out that neighbor's younger widowed sister is joining in. Their first meeting is one of my favorite scenes, as Tiffany (Lawrence) rushes in with her black garb and pretty apparently takes a liking to him through her frozen expression. Despite their 15 year age-gap (which was one of the squeamish, obvious things that continually took me out of the movie), Lawrence and Cooper have pretty good chemistry, and definitely are better together than separate in the film.

To sum it up, Pat tries to use Tiffany to get closer to his wife, agreeing to do a dance competition with her in exchange for her delivering a letter. From there, it's literally a straight series of montages detailing how close they get as they train together, endure a few conflicts, and generally "fall-in-love" before the big event. Off-topic, but those training scenes made me completely jealous of Lawrence's figure, which the movie almost hilariously makes ample effort to zoom in on.

As much as I liked the witty rapport and dry humor, this felt like one of those movies where you just keep waiting for it to get better. Throughout the beginning, I kept waiting for Pat to meet Tiffany, thinking for sure it'd get good from there. But after they met, I was still waiting for that great spark of brilliant acting, terrific comedy, and/or novel chemistry that I'd been set up to expect. Instead, it felt like their scene quality peaked at the diner, then steadily treadmilled down into standard rom-com territory. By the end, I was left almost bored by the formula of "meet, familiarize, love" that their relationship followed.

Similar to the entertainment plateau of their relationship was the plateau of acting from all parties. With so many nominations, I was fully expecting to be blown away and to have my long tepid opinion of Bradley Cooper to be magically morphed. But again, I was left continually, disappointingly waiting for that moment of acting excellence, even after the narratively predictable climax. I'm not sure what others are seeing, because that anticipated great moment never really came for any of the actors or for the story itself.

Aside from the fits of anger, Cooper's performance was fairly one-note, as was Lawrence's. There were good moments from both of them, but they were too fleeting and thinly spread to make much impact or demonstrate any serious acting prowess. All the characters wound up speed-talking like an episode of Gossip Girl, which fit the dry tone of the movie but didn't do much for the realism or quality acting department.

I know that Lawrence is a fantastic actress, and honestly I think her Hunger Games performance was far stronger and more nuanced than anything I saw here. In an effort to convey gothic depression, she ends up churning out her lines like a disinterested recital, aside from a couple temper tantrums and one teary-love-confession-breakdown befitting and resembling many rom-com starlets of the past. While she was good, her performance just wasn't even close to what I'd deem Oscar-quality, although admittedly I haven't seen any of the other nominees for this year in action. Same for Cooper, but at least I did emerge from this with a more positive opinion of him, and for the first time ever found him to be pretty appealing in his way. I think a lot of it is owed to the tux at the end.

The side performances were along a similar vein, although Robert DeNiro was admittedly a stand-out. His father portrayal was easily the best act in the movie, as he was the only one who really convinced me of his character and had me forgetting that he was merely acting out the OCD gruffness.

In short, I think this movie has been earning its buzz more through hype than true quality. It's worth a watch for a few laughs, but it's not the deeply meaningful, opinion-changing piece that people have been lauding it as. It's not even all that dark or funny. Rather than shedding light on the importance of mental health, the movie instead seems to convey that so long as you meet the right person, your mental health issues won't matter and will stop being disruptive to yours and other people's lives. It's actually pretty debasing, and disappointingly rose-tinted for a supposedly forward-thinking film.

Regardless, I do think it's going to come out a big winner on Oscar night, as it's fresh on everyone's mind and there haven't been any other films that have really trended in the critical scene. And I think most people will enjoy watching this, so long as you go in with lower expectations.
Email Post
Labels: American movies