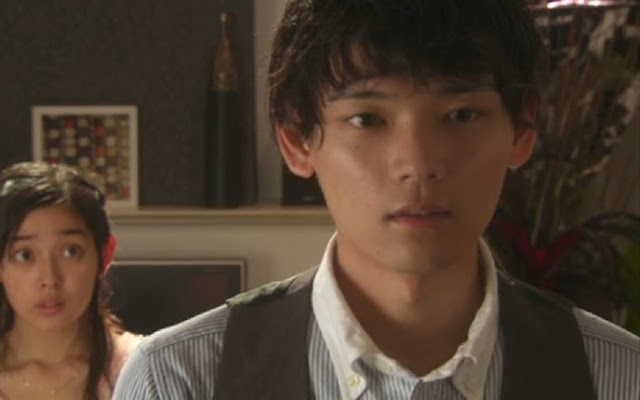 I admit, episode 16 made me cringe on multiple occasions. Third time around for this story was a bit excessive, and I had to force myself to sit through all the dramatics (the rain! the angsty looks!) that preceded the grand confession. I do appreciate that the schizo camera finally settled down at this point, allowing us to for once just watch the moment rather than get jostled around side-to-side in-and-out (seriously, please fire the director who did this crap. Worst filmed drama ever, not to mention one of the worst camera qualities).

I'm sure 99% of us watching already knew what was going to happen. She gets proposed to by desperate 2nd lead, she rejects proposal, runs through rain, meets Naoki, they have a sodden love confession, and onwards from there. It's all about execution, and unfortunately the way it was done here left much to be desired (that slow-mo dropped umbrella, pffft). It felt like a screen-by-screen replay of all the previous versions, which admittedly was true of the whole drama but felt especially dull and disappointing here. It's like they chickened out at the end and were afraid of anything somewhat original. New viewers of this story may be satisfied, but anyone else was probably left yawning like me.

I also had major problems with the characterizations in this version. Japan tends to do extreme caricatures for the sake of humor (it's one of the things that has turned me off the most to doramas), and that happened to pretty much every character here except the leads. Her friends about annoyed me to death with their stupid dialog and shrieky performances, the well-meaning parents were unrealistically pushy to Naoki (it's nice they cared, but they harped a couple times too many about "love", especially when there was about no logical reason why they'd be against Sahoko), and I wanted to punch Kin-chan by the end.

Let's just say WORST Kin-chan portrayal ever. The screamed proposal at the end of episode 15 was terrifying; no sane woman in the world would have accepted that. Worse, he came across as a total creep in episode 16, literally grabbing and trying to force her into the kiss or whatever was in his mind; I literally felt scared for her safety before she ran away. This was only reinforced when he violently shoved the bowl of meat onto the floor (whew, talk about violent tendencies). The actor's dark-lined eyes also freaked me out in all the close-up shots. He was looking at her like a stalker, not like the gentle and kind Kin-chan from the story and I had zero sympathy for his fate despite the drama's attempts to write him as pitiful.

The actor-actress 9-year age gap seemed to only get worse the further we went, and it was one of the reasons I had trouble connecting with the confession. The guy who plays Naoki had more chemistry with his ex-fiancee than Kotoko, if only because the former two seemed completely age appropriate. It's not the physicality so much as an underlying maturity gap between the two actors that distorted and made me feel sqeamish about any possible romance. At least Jung So Min was legal when she did Playful Kiss. But the girl here was only 16, which felt just short of cradle-robbing.