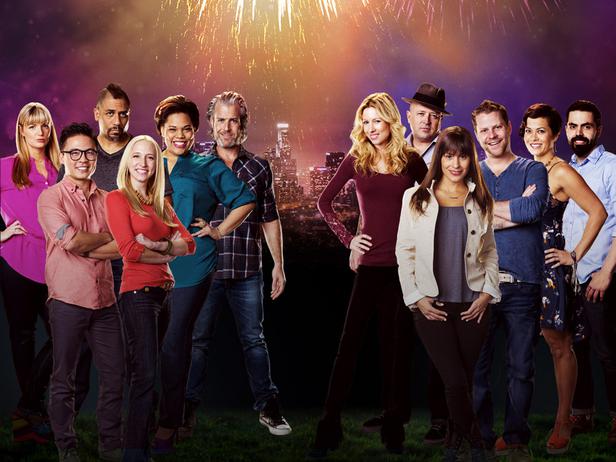 I enjoy reality competition shows. They’re a fun way to learn a little about what you should (and shouldn’t) do via watching other people’s mistakes. Adding food in just makes it all the more appealing, and there’s something nicely down-to-earth about Food Network Star that makes it my favorite of the bunch. My only question is, have any of the previously selected finalists actually made it to stardom (aside from Guy Fieri)? I personally have never followed any of their shows or careers after the competition ends. That said, I will with 99% certainty not be following any of the contestants from this season. There must have been a shortage of qualified applicants, cause I’ve never seen such a large mix of sheer incompetency.

The biggest problem is none of these people have even the basic presentation skills necessary to carry their own TV show. Most of them couldn’t even film a 30 second intro!! And those that are somewhat passable on camera have horribly fake personalities and/or a lack of any compelling idea for a show (e.g. Stacey and Nikki). Add in the fact that only about 20% appear to have any talent at actually cooking, and I’m left wondering if the mentors aren’t facepalming every five seconds behind the cameras.

Viet was the only one I liked, because he had such an adorable, genuine persona despite the chronic shyness, and also had legit qualifications as a chef. Alas, TV is a hard industry, and I understand why they had to let him go. But so far I don’t see any redeeming qualities in the contestants that are left. If anything, most of them should have been eliminated long, long before Viet. Here’s my rundown of thoughts post episode 6:

Nikki: Easily my least favorite personality, no matter how camera-ready she is. Her mindnumbing-fake-chirpy act may have gotten her far on Youtube, but there’s no way in hell I’m sitting through commercials to watch her. The “meat on the side” deal is also starting to grate on my mind like screechy music. We get it, now please stop repeating it like the audience is too moronic to remember. What makes it worse is that her dedication to veggies doesn’t seem to be backed by any real talent. I don’t need someone to show me how to make subpar veggie sauce.

Russell: The fact that a 5-second commercial transition becomes the reason why he’s still on the show about sums up his competencies (and the lack of anything resembling talent in anyone left). I kind of like his “revolution” idea, but his persona feels like watching a slug crawl through the ground. He must have some sort of edge and intelligence to have succeeded in his business, but so far I’m not seeing any of it. Instead, he reminds me of a slooowwww, dull employee-type, of the sort you’d find working at Walmart or a cheap fast food joint (fitting since he used to work for McDonalds). Much like Nikki’s meat deal, his “7 sins” is also becoming terribly repetitive (and his show hasn’t even started!).

Stacey: Others have said it, I think it bears repeating. Booooorrrrinnnng. A cooking soccer-mom, eh? Pity food network already has one in the form of prior winner Melissa D’Arabien (who I also didn’t care for). At least Stacey seems to be taking a healthy rather than budget-friendly approach, but there’s still not enough distinction and appeal to warrant her own show. That said, she does seem more ready to take the stage than the remaining contestants, so I might be willing to settle for her to get further. But she’s gotta learn to find something interesting to talk about.

Damaris: She’s my favorite of those remaining, because she’s the only one who seems authentic. It helps that I enjoy Southern food and would rather learn to cook that than some of the other crap the contestants are spewing. But while I like her and her concept, I highly doubt she’s ready to pull off her own show.

Rodney: I don’t see any way to build a show around pies. That sounds like a one-off episode of United Tastes of America rather than a full-on, dedicated TV series with a single player. More importantly, I find the guy to be a huge turn-off and a cooking hack. He should have stuck to his middle-age crisis rock-and-roll instead of trying to subjugate all of us to an incomprehensible, half-baked attempt at food fame. And seriously, Food Network already has one wannabe in the form of Guy Fieri, please please please don’t attempt to add this hat-wearing chump to the mix. It’ll be a crime if he’s not eliminated by the next episode.

Chad: He’s last because I literally forgot he was even on the show. I rather like his understated realism, but there’s a reason it took him three tries to get on this show. There’s no charisma, and even worse, I’m far from convinced that he’s a true “BBQ man.” My biggest pet peeve ever is people who are incapable of learning, and after more than 6 episodes worth of “too sweet” and no perceived improvement, I’m left wondering if he has a defective taste bud. If your only ability is to bbq, and you can’t even get that right, I think you deserve to get the boot.

At this point, I’m thinking I should just go and audition for the show, because some of these “finalists” are so bad there’s almost no way it could get worse. Yes, it’s nice to have a relateable average Joe-type as a host, but there has to be some basis of TV charm, maturity, and actual knowledge of cooking before you go on. And sadly, these three qualities appear to be mutually exclusive in all of the people left. Well, at least it makes me laugh.
Email Post
Labels: American Series updates