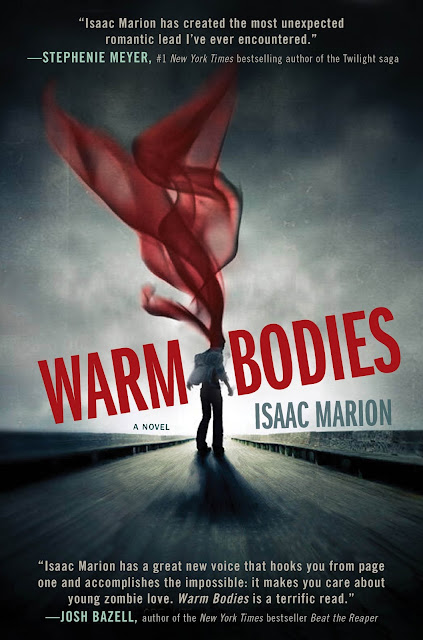 There's two fiction trends I'm really hoping we're about the see the last of. The first is the dystopian world, and the second is the supernatural romance. It becomes a repetitive chore and a testament to our collective unoriginality when almost all bestsellers of the past 5 years fall into one of these two categories.

I've only made it halfway through WB, and that's been more than enough for me. Zombie love sure is a novel idea, but the execution of it feels forced and just plain fake in this book. It's all too clear that I'm reading something written by a 30-year-old male hipster with a love of old-man music. I'll tell you this - no real-world, 20th century 19-year-old girl would be thrillingly arguing semantics about John Lennon, Paul McCartney, or Ava Gardner. And there's my underlying issue with this book, that there's not a shred of believability in it or in its characters.

There's too many conveniences randomly lined up for the sake of developing the romance, and the world itself seems about as well thought out as a grade schooler could make it. The bad guys are called "Boneys," really? And it's sad that I now better understand zombie sex than the actual setting of the story. In fact, the author initially states how zombies have no desire for sex, then proceeds to graphically describe multiple incidences of them trying to have at it. I could have done without the horndog fantasies, thanks.

While R is dull but tolerable, Julie doesn't float my boat in any way, shape, or form as the essential pivot for the story. She feels completely contrived, like the result of the author's inappropriate wet dreams for a young teen girl rather than a flesh-and-blood person. This is evident in not just her anachronistic song taste but all of her dialog, which comes across as someone trying much too hard to be cool and interesting. I'll give you an example - her trademark is to say "Shrug" whenever she shrugs. I don't think I need to explain how blazingly stupid this is, and everytime she does it I want to cringe and then hurl something. We just read that she's shrugging, do you need to have her verbally confirm that for us? It's one of the many times when the writing gets the best of this author, and in trying to do something unique he ends up giving us bullshit.

Given all this, I'm disappointed that this is another example of America's bestsellers. Do readers these days have no brain cells? I wanted to like this but I can't, and I must urge readers to stay far away (unless you're a 30-year-old dude sharing a similar fantasy).
Email Post
Labels: Book review