Nonfiction Book Review: Your Network is Your Net Worth 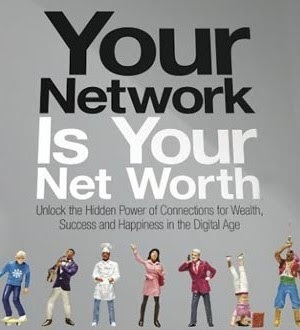 This won't be to everyone's taste, but I wanted to go ahead and review a nonfiction book that I recently chipped away at, the cheesily titled "Your Network is Your Net Worth" by Porter Gale. I read this while watching several fantastically dull old dramas (ahem Goong), and have to admit I'm becoming increasingly more keen on the act of multitasking with something productive while watching shows. Truth be told though, this book was only somewhat more substantive than the drama on my screen. It's a business book after all, which I've learned tend to be painfully obvious and more or less a rehash of common sense. If you're trying to become a great networker by reading books, well, that's probably not going to work out. (Rant ahead - click away if you love this book).

Porter's book came highly recommended by some esteemed business professionals. "It's the only networking book I connected to," said one guy. Not to devalue his praise, but that's not much of a category for comparison purposes. There's only so much that can be printed in text about the topic, and that was clearly a problem for this book and its writer. The book has about three actual ideas that were forcibly extended and beaten out into ~300 pages worth of Big Name Celebrity anecdotes. There's truth to the saying that stories help illustrate ideas, but the author seemed to take that to mean "you need 20 stories to illustrate one idea, just in case people are too stupid to understand the first few times around (and to make this long enough to publish)."

The bigger problem I have is that the ideas in this book aren't even anything worth printing on a page. The entire first section (~100 pages) is dedicated to the most generic topics you could think of. She spends chapters espousing how you should go do something you love, pursue your passions, blah blah as if we haven't all heard and tried to do that. After a while it's like we get it. Nobody's working a miserable job because they have a realistic choice, just saying. The push for Give Give Get was nice (annoying alliteration aside), but also roll-your-eyes obvious. Give so you can receive, be nice to others. Yep, makes sense. I don't need the tale of Sir Richard Branson so generously talking to some high schoolers to ink that point in. Now, if he'd committed a couple million to each of them I might be more warm on him, but the reverence with which she writes about him flying over in his private jet to spend all of a few hours with them just felt forced and undeserving.

Along a similar vein, while optimism is nice, this book crosses the line into rose-tinted lack of reality. Every example she gives is of people who are doing fine and dandy, not to mention how her narrative vocabulary seems limited to so-and-so "said with a smile." While the interviewees try to stress the fact that they've experienced setbacks, at the end of the day we're talking primarily about the top 1%, the ones with a happily ever after at the end. It felt fake and makes me wonder what type of glossy, failure-less world this woman lives in. Clearly a nice network, that.

Now, if you live in a bubble and have never used Twitter, Facebook, or email before, this might be the book for you. Don't tweet when angry could be a valuable lesson for your future career in the lucrative tech space. If, on the other hand, you're pretty well-versed and not a complete social recluse, there's probably better "productive" books to spend your time on. I'm admittedly being tough here, but that's because this book failed my expectations so completely that I'm annoyed to even look at its cover. Seriously, the junk that gets published these days. People, if you're trying to build a network, I'll sum it up for you:

1) Go out and meet lots of intelligent, smart people and start up some interesting small talk with them,
2) Don't be an idiot, meaning don't say or write things that could offend people (e.g. don't write a brutally honest review like this), and
3) Become rich and/or famous so people will actually want to talk to you.
Email Post
Labels: Book review rants