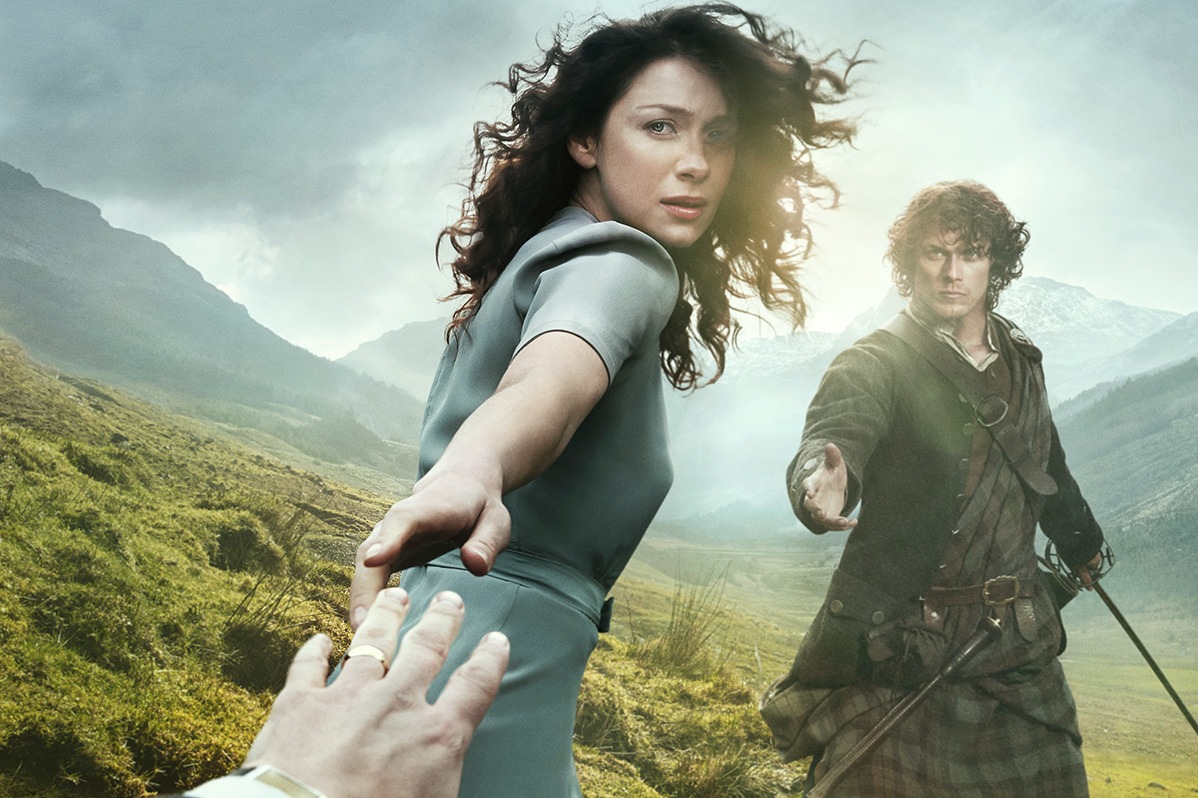 Outlander's a show I pretty much knew I'd enjoy from the moment I read the synopsis. It features a post-World War II era army nurse who travels back to 1743 Scotland, where she meets and falls in love with one of the Highlanders (who's also one of the sweetest, hottest guys in TV show history). It's the epitome of an epic time travel romance, but what I like is that this time the woman gets to travel back and apply her modern knowledge and values. Even better, it's set in the visually gorgeous Scottish Highlands and features sexy (though at times incomprehensible) accents galore. I'm happy to report the end result of the first half of season 1 delivered on my expectations, and in fact it's been a very long time since I've been obsessed with a series to the degree that I am with this.

For those not familiar with it, the show is adapted from the Outlander book series by Diana Gabaldon, which from my post-viewing research is still ongoing and consists of eight books that span decades from the time our two leads first meet. Gabaldon said in an interview that she wanted to write about a marriage, not just a courtship, which is partly the reason for the extended timeline. 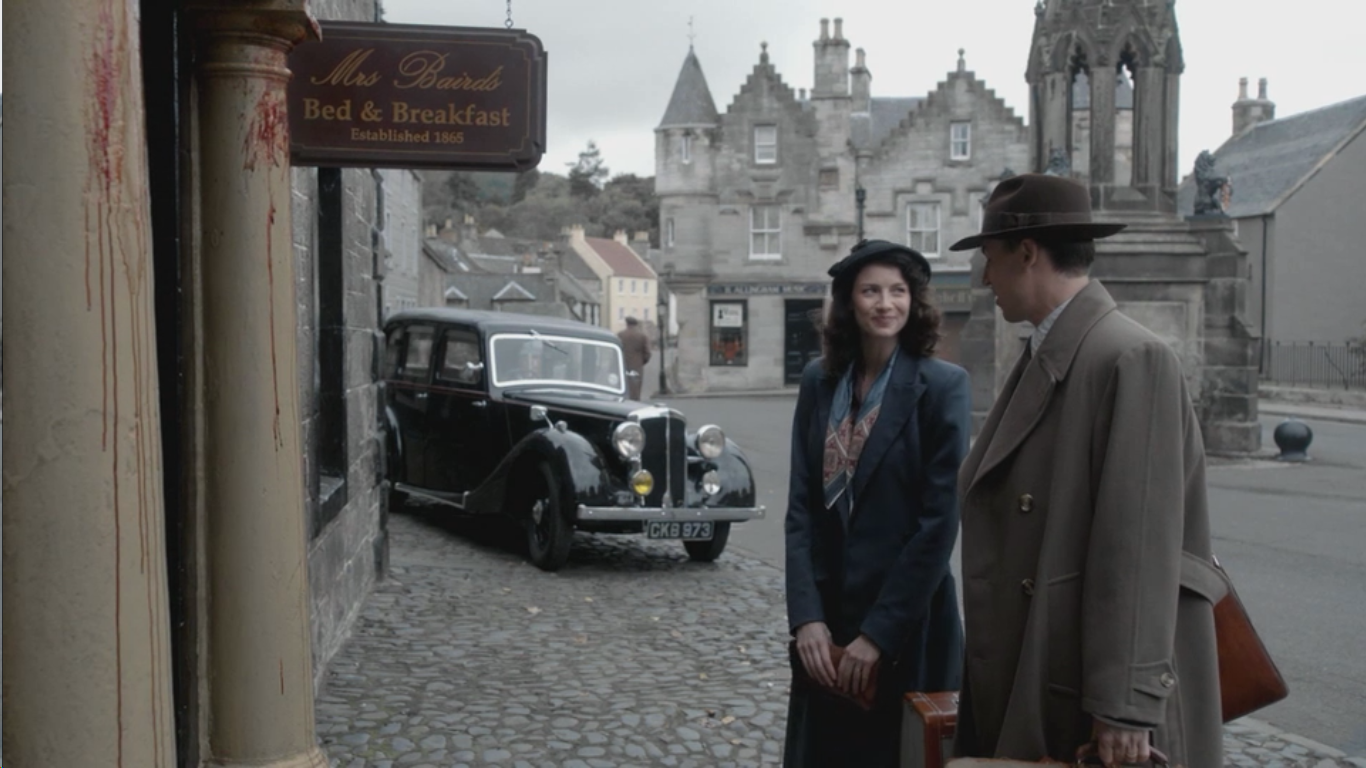 At the beginning, our leading lady Claire is a Briton who's happily married to her husband Frank, and they've just reunited following the end of the war. They take a vacation to the Scottish Highlands, and she's essentially thrown back in time about 200 years due to some stone-related magic, where she meets and stays with the Clan MacKenzie. She also meets the young Jaime Fraser, who's an idealistic and loyal Highlander, and eventually falls in love with him.

Episodes 1-8 have aired so far, but frustratingly Starz decided to split the airing of the season so that part two (1B) will air again starting this Saturday, April 4th. I pretty much binge watched episodes 1-8 in a couple days a couple months back, and of course was left with the haunting niggling of having to wait months for the rest of the show. But I will say this one's worth it if you're on the fence. Just keep in mind it's cable, which means lots of violence and sex. 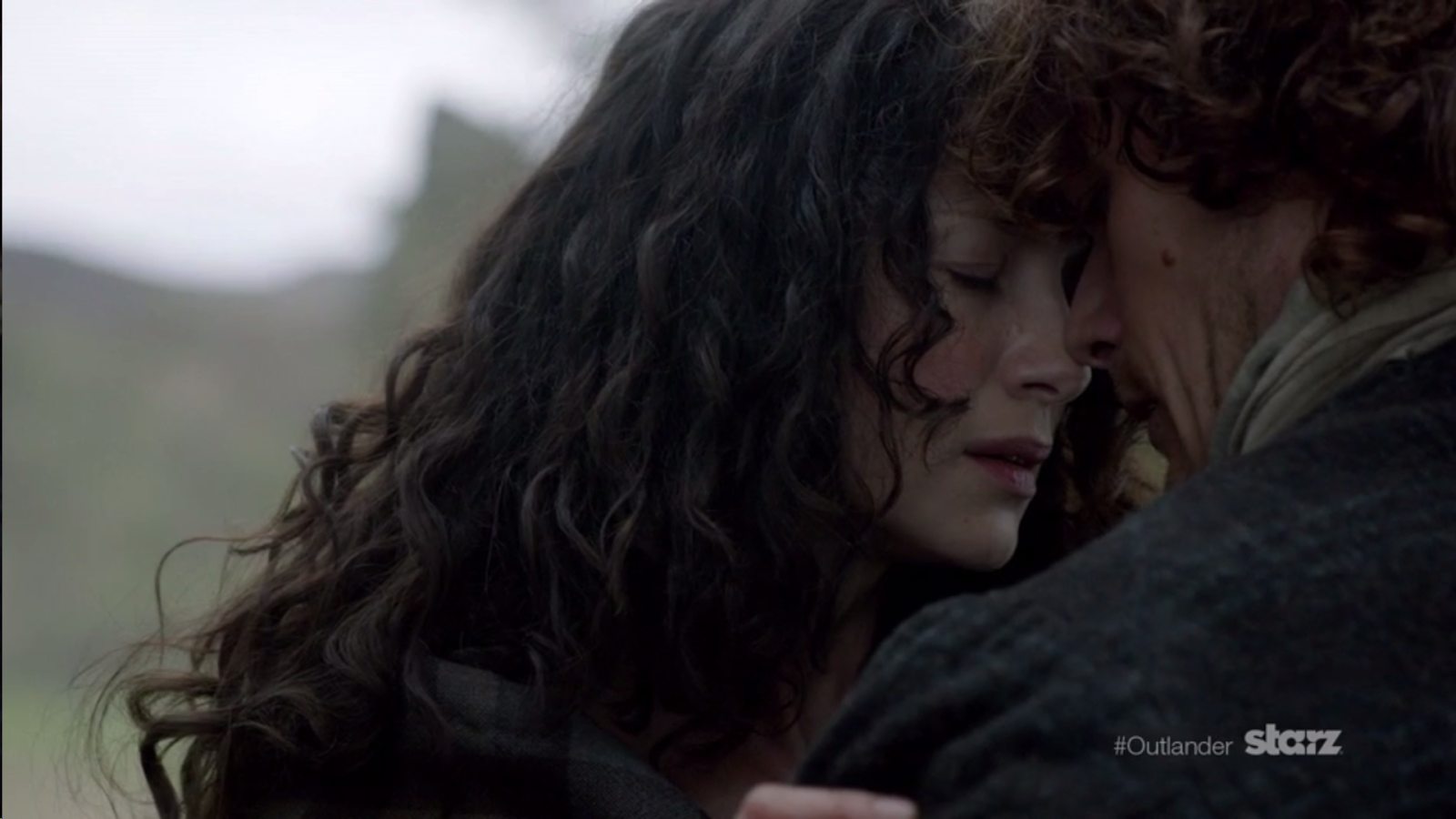 The main draw for me is the sweeping, almost painfully addicting love story between Jaime and Claire, which takes multiple episodes to build up and then positively explodes in a show of love and passion in the penultimate episode. It features a steadfast hero who loves our heroine to the ends of the earth and basically goes through hell for her sake, which makes for both intense and wrenching viewing. The pace of the romance is fairly slow by Western standards, which I found more realistic, and the two continue to face obstacles even once they're together (so I've read, as they've only just gotten together in the aired episodes). Jaime just breaks my heart, and he's the largest reason for the addiction factor in that I just want to see him and Claire find happiness together.

Romance aside, the political backdrop is admittedly fascinating and also eye-opening for someone like me who's ignorant of British and Scottish history. Claire travels back to the depths of the war between England and Scotland, with about two years to go until a tragic ending falls upon the latter (which is the side Jaime and everyone she now cares for is on). It's an intriguingly dark premise, and I'm curious about how the show will handle this shift when the time comes.

Hands down, this is also one of the most gorgeous productions I've seen. I'd expect nothing less from something set in Scotland, but the production has really made an effort to emphasize the beauty of their surroundings. We get sweeping shots of green, rustic hills and country land enveloped in mist. It's quite literally the perfect setting to the story, and brings this melancholy, untamed air to the show.

Perhaps most importantly, the acting is a standout on almost all fronts, and especially with our two male leads. Jaime's Sam Heughan is perfectly cast and completely captures the lovably kind and innocent yet strong spirit of the character. I'm always thrown when I see photos of the actor in real-life, because I don't find him very appealing on his own, but when he plays Jaime he seems to transform. I suppose you could argue that's the case for most actors, but the disparity of the appeal I find for his character versus real-life persona is surprisingly severe.

Our second male lead, Tobias Menzias, has the challenge of two vastly different roles, one a violently crazed killer and the second a gentle and loving husband. He plays both with aplomb, and while I don't really like either of his characters, I can respect the care he's put into the portrayals. I will add that it actually surprised me how rather vapid the actor appears in the panel interviews I've seen. He seemed a bit drunk (or perhaps more kindly just super jetlagged) at Comic Con and other interviews, but at least that helped me dissociate him from his intense roles. 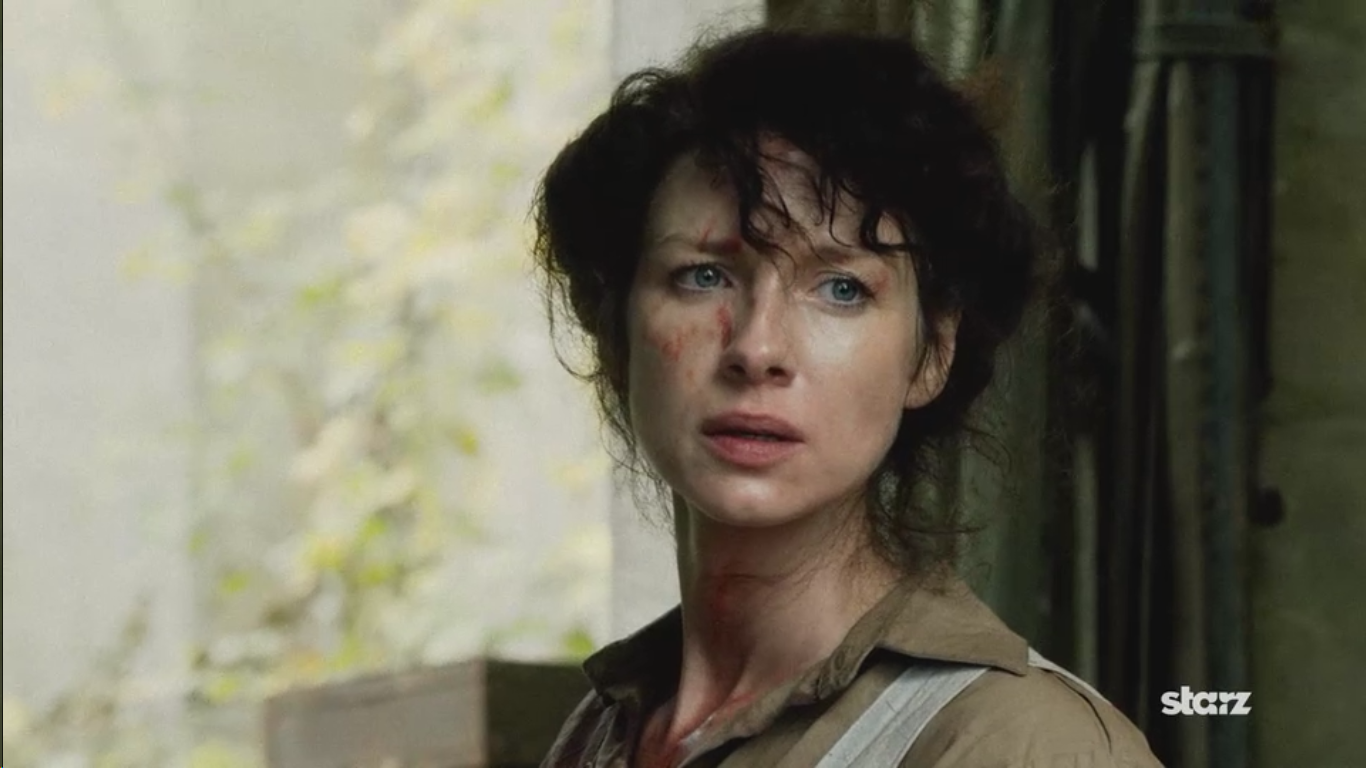 Coitrina Balfe is also doing a commendable job as leading lady Claire, although I feel like it took her much longer to adjust to her role. To be fair, she's also had the most complex part in trying to capture a 1950s "modern" woman reacting to the unbelievable situation around her. There was a significant bit of overacting in the first few episodes, when Claire often came across as shrieky and for lack of better words, trying too hard to seem modern and different. I also get a bit of a disjointed vibe from her acting, in that she sometimes seems unsure as to how she's meant to be playing certain scenes. For example, in the ear-nailing incident, she literally stands there looking bored and confused, when if you read the book, she's meant to be aghast and conflicted.

But I do think she's improved significantly in even just the eight episodes to date, and she also has stunning chemistry with Sam Heughan, which is critical. They make me want to root for them as a couple. And there's no denying that she seems so regal and classy in real life (probably an inevitability of being a British model), with an accent that's seriously enviable.

The Aspects I Don't Enjoy

The thing with this show is I didn't feel all that impressed while watching, but once it was over I definitely felt the withdrawal. As in, the episodes could feel really drawn out and dull at points, especially early on. Like most TV shows, it takes a few episodes to get absorbed into the characters and the world, and I think the earlier episodes were definitely weaker. Luckily this improves, but just keep it in mind if you do watch.

I also spent much of the show hating Frank / Black Jack Randall, the latter who's about as crazy and nasty as they come. I really wasn't a fan of the doppelganger gig they pulled here, with the same actor playing both characters. It not only felt like a too-worn trope (hello, Vampire Diaries), but also ruined my already thin regard for Frank, because Randall's so sickening that he can't help but tarnish everything associated with him.

I wanted to like Frank, because he really did receive a charming introduction as the open-minded, patient and loving husband that Clare desperately wants to return to. Since her desire to reunite with him motivates nearly all of her actions in the series to date, I wanted to understand and similarly support her on that. But when you poison Frank by associating him physically with one of the most despicable men imaginable, that becomes a very difficult attempt. Since most viewers will prefer Jaime to Frank regardless, I suppose it's moot, but this was just a personal preference.

What also worries me is that the production team has stated that each season will be based off one of the books. First off, I'm not sure how they'll pull off the decades change believably without switching actors. But the actors are amazing, and removing them would probably remove much of the appeal of the show (especially Jaime, who's so perfectly cast in Sam Heughan that I can't even.) Additionally, from the synopses of the books, it doesn't look like life ever gets rosy and happy for Clare and Jaime. Not to seem naive, but I rather like my leads to earn and receive a happy ending, rather than toiling until the bitter end.

Be warned that there is also quite a bit of angst, with accompanying violence too. It was a bit difficult to watch, especially the scenes between Black Jack and Jaime. I expect that'll only get worse in the coming episodes.

Quick Thoughts on the Novel:

Like most people watching, I was left in a state of suspense by the final moment in episode 8. This drove me to pick up the Outlander novel and read up to the wedding portion. I ended up deciding not to finish the novel, mainly because I didn't want to ruin the surprise of the coming episodes. The show is surprisingly almost a straight replication of the book. Nearly all of Claire's narrations are pulled directly from the book, and all the events have played out exactly as described.

It's clear that those who've read the book are still able to enjoy the show, but I personally prefer the show, and would rather watch how things play out there. I suppose I've been spoiled by the amazing visuals, music, acting and chemistry on the TV series, but reading the book by contrast felt like a rather flat experience. I'll instead just wait out my time until the premiere.


While I'm guessing the audience is primarily female due to the heavy romance factor and the book demographic, I do believe this is a show both guys and girls will enjoy, whether or not you've read the books. Definitely recommend, especially now that you won't need to wait much longer for Season 1B.
Email Post
Labels: American dramas