Movie Reviews: Inside Out and The Avengers: Age of Ultron 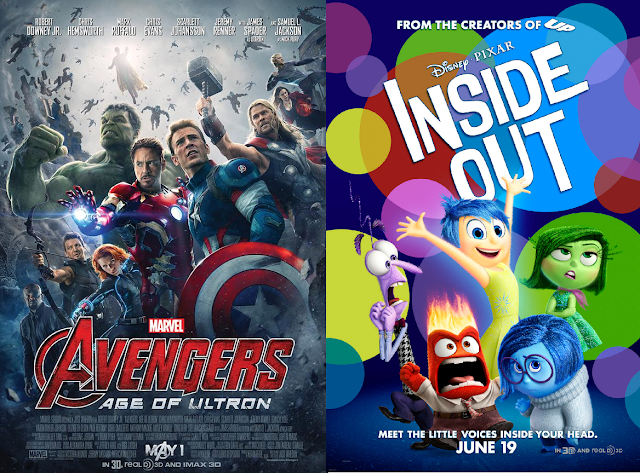 For those thinking of going to theaters, I wanted to weigh my thoughts on two recent Disney productions, one of which I really enjoyed and the other which I loathed.

To my surprise, I really enjoyed this film, and believe that most adults will. It's witty and thoughtful, managing to be appropriate for children while covering a topic that resonates with all ages (in fact, older is probably better). The premise is that your actions are controlled by your emotions (so true), and while the overarching story of a girl who moves to a new home has its share of cliches, the movie keeps things funny and intriguing.

I didn't care for any of the "outside world" scenes with the parents and the kid protagonist, Riley, but I loved the exploration of the mind led by our emotions, Joy and Sadness. I even liked all the supporting characters, especially the cute Bing Bong. Highly recommended, and not much else to say here. Oh, and the Lava short before the film was also enjoyably cute.

The Avengers: Age of Ultron

I am officially done with the Avengers and all of its sub-hero series after this movie. This was quite possibly the worst movie I've ever watched in theaters, even topping the idiot-appealing Madagascar Penguins. The plot was confusing and pure nonsense, the jokes were cringeworthy (e.g., "playing hide the zucchini" in reference to Black Widow and Hulk's time alone - topping the list of things I want to burn from my brain).

I didn't think the first Avengers was all that bad. It wasn't great, but I could see why it was popular. This, on the other hand, was clearly a film made to generate money. Marvel / Disney are clearly going too far in the commercial direction, what with releasing what seems to be an endless barrage of subpar, unnecessary superhero films every year (seriously, you're desperate enough now for Ant Man???). I'm more of a DC fan anyways, but as it is I think the Marvel team at Disney should take a page out of their brother subsidiary Pixar's policy of not rushing releases and actually bothering to think of a story before creating a movie.

My list of problems with this movie include a stupid plot, horrible dialog/writing, a very unnecessary and embarrassing romantic line, and cliches at every corner (perfect life = picket fence country house with a wife and two kids, yes?). I understand that superhero movies require some suspension of disbelief, but this one took it much too far. It felt like every conflict was resolved through some random-shit made-up-on-the-spot resolution. Ultron was also just a terrible protagonist, who still confuses me in that I don't understand what the hell he is.

Without CGI, there would be no movie here. In fact, I don't know why they even bother with physical actors when all the roles could be played by voice actors and a computer (who might even do better jobs than the muscle-loaded but rather talentless cast). The obvious and overdone "humanizing" scenes, e.g., Hawkeye's very cliche American family and Black Widow's whole "I'm sterile" bits also just came across hammy and honestly not very relateable. It was clear the film was just trying too hard to force emotional bits in to the otherwise surface-level story.

Let's also rant a bit about the Hulk and Black Widow romance. I get that these are the only two Avengers without their own franchise films right now, and thus without an existing love interest. But you're essentially destroying both characters for me by trying to cram them together. I liked Black Widow because she's independent and strong, and has great, non-romantic rapport with her guy best friend. But you turned her here into a needling and moody woman who feels unworthy because she can never have kids. Ugh, you can tell a guy wrote this crap.

Hulk was generally my least favorite Avenger, as I've mentioned before, because Mark Ruffalo just doesn't do it. Ed Norton was and always will be Hulk, and Mark is just the acting-fail of a fill-in who's made Hulk a moody, sad sack of a man. Putting these two together does not work in any fictional universe, and I'm instead left feeling disgusted.

Joss Whedon should be embarrassed by this shit and needs to stay away from fully producing anything else in the future. He should have hired sub-writers, for plot, romance, jokes, etc. Instead it looks like he tried to rake in all the dough himself and hoped that splashing out on CGI would make up for lack of substance. I'm angry that I wasted money on this stupid franchise and warn all of you to stay far, far away.
Email Post
Labels: American Marvel Superheroes movies