Answer Me 1988: My thoughts on all the love angles and story so far 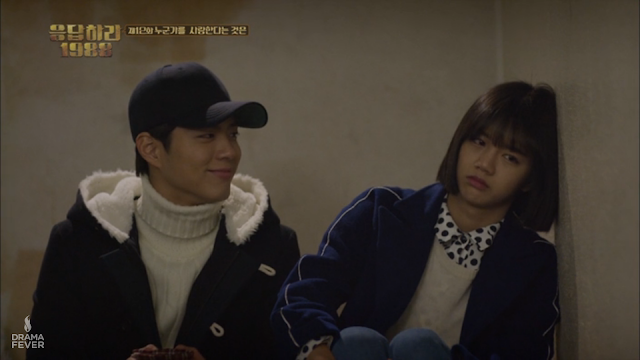 This drama's just such a breath of fresh air in a landscape filled with love-centric, cliche and melodramatic plots. It reminds me of In Time With You in that sense, as a drama that feels like it's populated with people that could truly exist facing real-world challenges. Similar to ITWY though the main weakness lies in the many varied lovelines, which are convenient at best and mind-numbingly drawn out at worst. But overall the series possesses this sense of authenticity and enrichment factor that I haven't yet found in anything else this year. It's a drama that makes you feel like you come out of each episode as a better person for having seen it. I don't recall having felt this way about either 1994 or 1997, perhaps because of their central focus on the younger generation and their mysterious, blood-pressure inducing romances. Here, I actually do feel invested in all of the characters, young and old. Note that here I'm only discussing what I've watched through episode 14.

As much as I love the general story though, there are definitely some nitpicks. The biggest one is the the central Deok-sun mystery romance. In both 1997 and 1994 I was on the wrong ship, and here I strongly favor Taek so there's a prediction for the ending if anything. I'm taking it easy this time though, as the expectation of being disappointed will hopefully take out some of the pain when it comes. Jung-hwan is perfectly fine, but rather staid and predictable (like all the other final pairings in this series). He's also frankly a bit of a jerk. Yes, a soft-centered jerk, but a jerk nonetheless. Taek, by contrast is the sweet, kind sort of man that is nice to your face and that doesn't have to hide behind rude pretenses. In my experience, the latter is absolutely the type that you want to marry. You need only see the rude front of the husband in the future scenes to figure out which she ends up with. Additionally, this series has never failed to have the husband be whoever the girl feels romantically for first, which again is clearly Jung Hwan here.

I'm also surely in the minority here, but I'm not a fan of the Taek's father - Sun Woo's mother love angle. It feels like the drama is telling us that singledom is the worst of all fates, and no normal person (certainly not in this neighborhood) can or should remain single. Instead, they should settle down with a conveniently widowed neighbor that happened to also be their childhood friend. Just no. I don't see the two's chemistry so much as I do a desperation for companionship and a need in Korean culture to settle down or be done for. I also think both Taek and Sun Woo's reactions to this pairing were too idealistic. Having experienced a similar situation myself, I find it a hard pill to swallow that somehow a good child should only be happy when your parent decides to remarry and start another family in their late life, and that you shouldn't possibly feel any sort of jealousy or insecurity (or that if you do, it'll be magically alleviated by speaking with the ghost of your dead parent). This is clearly the workings of a writer whose never experienced this first-hand, and while I can't entirely fault her for that, I also can't be a fan of this.

Bo Ra and Sun Woo are a better pair here, in that I don't strictly dislike them or like them. They're fine, and it's been sweet to watch them progress, but it's also probably the most predictable loveline of them all. They're young and cute and complement each other and will clearly end up married. It's not bad to watch, but also not super interesting. In fact, I felt like their scenes only mattered when Sun Woo was asking for her advice on the Choi's father situation. Everything else is a bit of filler.

The neighborhood dynamics are some of the best parts of this show, and make me very envious of not having grown up in such a tight-knit community. It really is a fantasy world in a way, but a very idealistic and hopeful sort of fantasy that you want to exist in reality. Of all people I am most drawn to Jung Hwan's mom, who's alternately hilarious and badass and caring towards everyone around her. I like her even more than Deok-sun's parents, which while as sweet as usual just don't have nearly the amount of character.

In terms of acting, I was surprised by how well Hye Ri has done in the part of Deok-sun. Mind you, my expectations were extremely low and I don't think Deok-sun is either complex or difficult to play, but Hye Ri manages to fill the role. She was very shrieky in episode 1, but the softer scenes have let her shine, and I think she's done as well as possible with her limited acting experience. I also think she clearly has more chemistry with Park Bo Gum than Ryu Joon-yeol (and who wouldn't given the adoring way the former stares at her), but regardless the writer will write whatever ending she pleases.

Regardless of my gripes on this show, I'm continually tuning in each week, and anticipate doing so through the rest of the series' run provided things don't suddenly slow down or take a detour. Worth the hype and the high ratings, and more drama writers should take a cue from this and stop writing such ridiculous plotlines and exaggerated characters. At the end of the day, audiences just want something that's worth their time and emotional investment, and Answer Me in that regard knows just how to give back.
Email Post
Labels: Answer Me 1988 dramas Dramas Update Korea Park Bo Gum