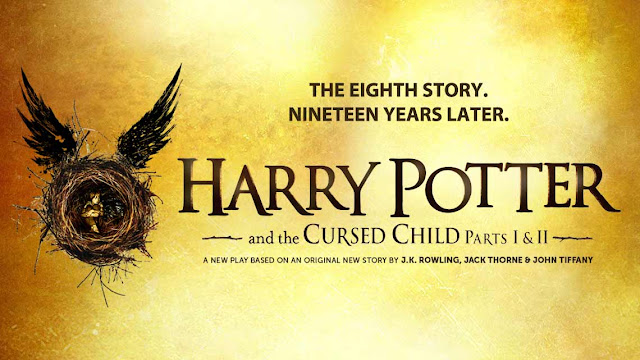 Harry Potter and the Cursed Child has been on my to-see list since the play came out in New York last year. I'm a longtime fan of the books (aren't we all) and was curious how a stage adaptation of a sequel years set over a decade later would work. Note this review is only for Part I, as given the length of each part (3 hours each, 6 hours total) I haven't yet seen Part II. Overall, while I was entertained, I would put this into the same category as the Fantastic Beasts movies - entertaining, but missing much of the magic of the original series. 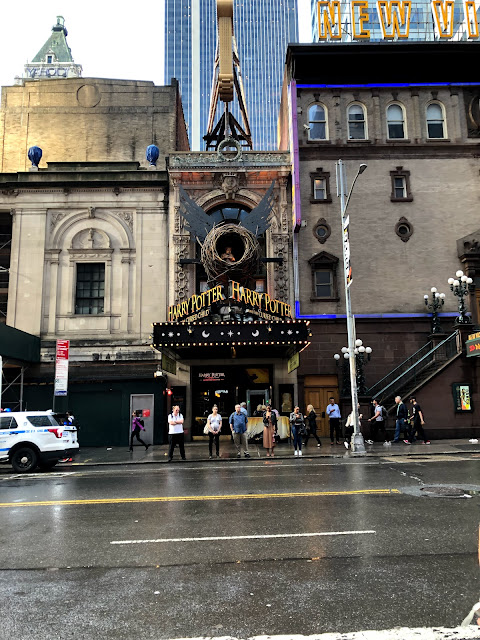 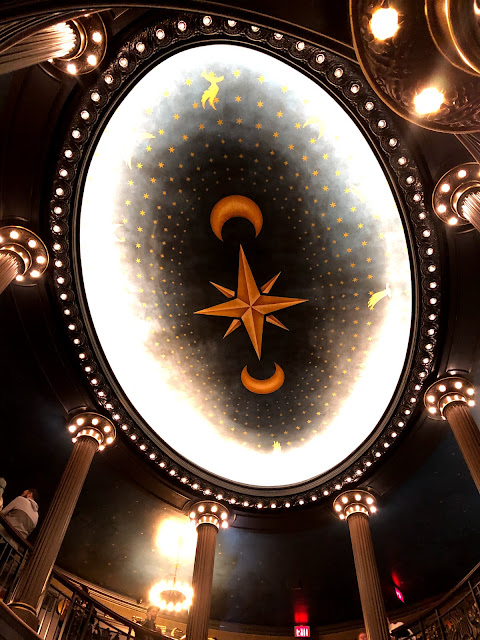 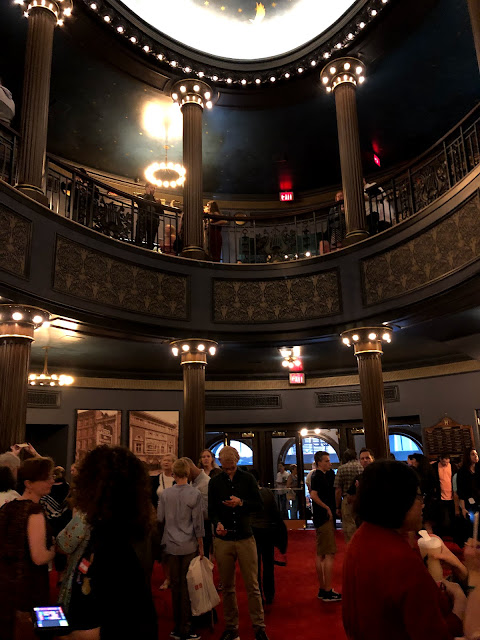 Harry Potter on Broadway is set at the Lyric Theater by Times Square, which was previously occupied by Cirque du Soleil's Paramour. I actually saw Paramour during its two year run here, and will say it was a pretty forgettable show save for one incredible acrobatic sequence starring the Atherton twins in a hair-raising stunt where they hung hundreds of feet up on the ceiling of the theater with no safety gear. Given the otherwise tepid reviews for the show, it probably makes sense that Cirque accepted a ~$23 million payout to vacate the Lyric early for HP. 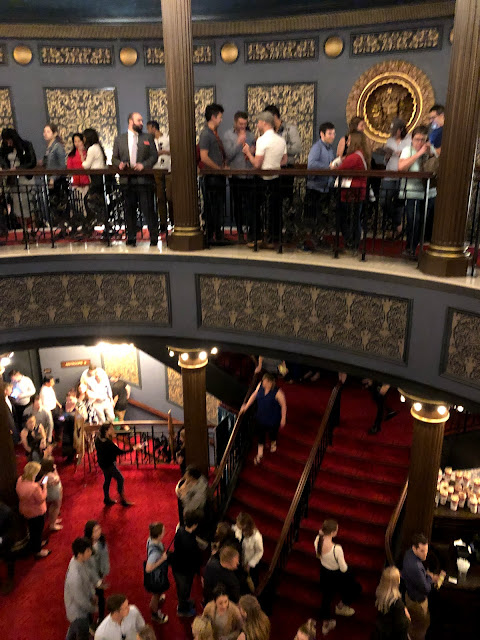 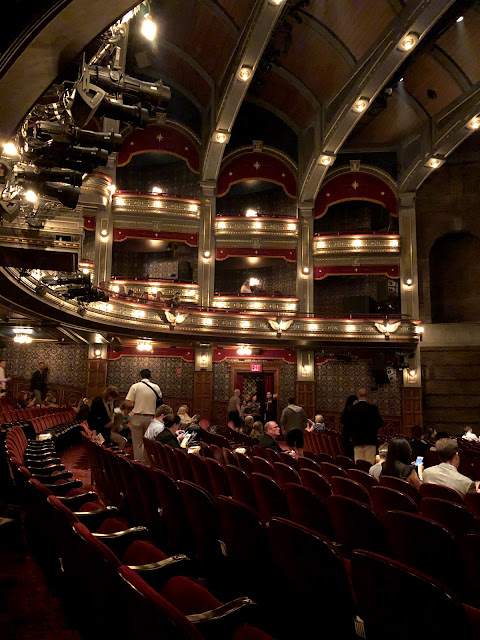 The Lyric is a beautiful theater and stands out among the many Broadway theater venues. It features a gorgeous ceiling and a cinematic mezzanine balcony in the lobby, a space that's been completely redone by the Harry Potter team. What's fun to see and compare is how the theater has transformed from the glitzy, bright gold and red Old Hollywood backdrop of Paramour into a completely dark, smoky blue and gray palate for HP. I have to say I much preferred Paramour's decor, as the HP design team went a bit too far in the dark and mysterious direction, to the point where the interiors feel rather claustrophobic and difficult to navigate, especially when packed with hundreds of guests. 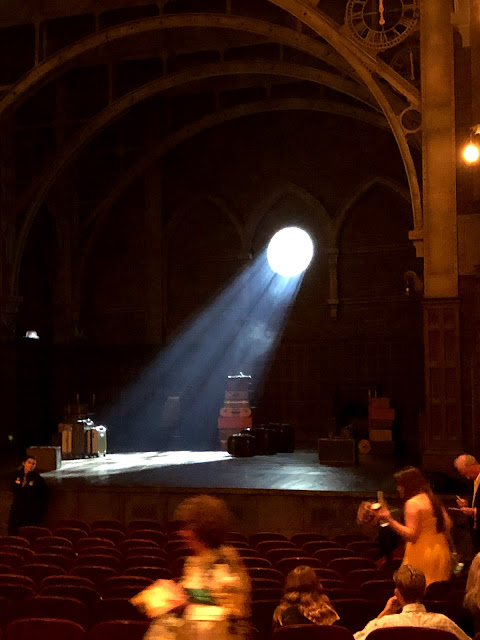 The story for The Cursed Child starts right at the point of the epilogue in Book 7, when Harry sees his children off to Hogwarts at King's Cross. The story spins rapidly through the first couple years of Albus' time in Hogwarts via a series of montages, and then settles in once he's about midway through his schooling (and in the midst of his angsty teen years). From there the plot takes a particularly fantastical turn, involving a ploy to rescue an old-time character and subsequently alter the events of the original books. 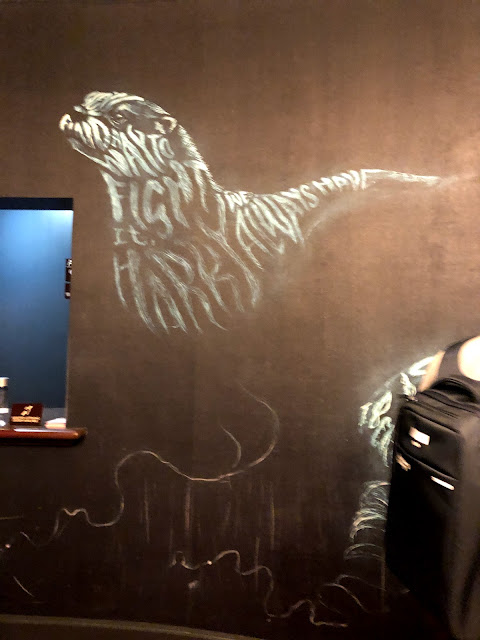 I won't spoil too much here, but I will say that generally while it was fun to revisit old characters (Ron, Hermione, Harry, Ginny, and more), the main cast is very much in the sidelines and the young generation (Albus and Scorpius specifically) own the bulk of the action and screentime. In some ways this seems fitting, as Harry's adventures effectively wrapped up years ago and his main challenge now is wrestling with the challenges of fatherhood and some legacy issues that inevitably circle around The Boy Who Lived. He has a number of scenes and pick-ups from the original books, but he's not the one driving the plot and ultimately is not all that important to the storyline.

Albus and Scorpius are instead the said drivers here, and I will admit that after Part I I'm still not entirely warmed up to either their story or to them as characters. A Broadway play, acted by overacting young men is such a different medium from a third-person book series that leisurely sets the magical world and is able to focus around one character. Inevitably parts of the play end up feeling like fanservice or dramaticism for the sake of entertainment. I would relate the experience of watching the play to being akin to how I felt while reading fanfiction based on the series years ago (and yes, I was a very avid connoisseur of this). It feels like a piece of the world and provides some peripheral satisfaction, but it also doesn't feel completely canon, and in fact, some of the plot even feels borrowed from fanfiction (the main mission of the play is definitely something I've read in fanfiction years ago). In my mind, Harry Potter's story still ended with Book 7. The play does not reflect the reality I see for these characters, in large part because the experience of watching the play is so different from the experience I had while reading the books or even watching the movies. 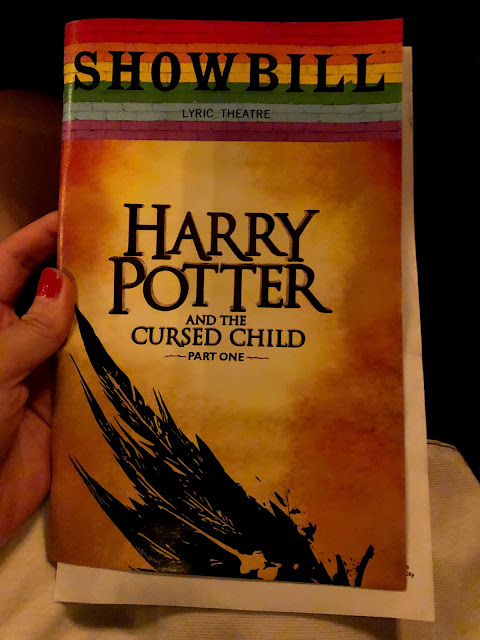 This moves me to my principle complaints on the play. It's overly theatrical in its execution and presentation, featuring actors shouting their lines and playing up to the live audience. There's a plethora of jokes and stunts meant to gain quick laughs or to impress with the high-budget nature of it all. The story is decidedly not concerned with character so much as it is with its audience and impressions. The soundtrack is also nothing like the original movie soundtrack. and quickly came to feel completely at odds with the magical melodies of the movie series. It features with I can only describe as a bohemian and overly modern undertone. It doesn't help that it's often paired with strange transition sequences, featuring extras who strut in a coordinated fashion across the stage while flaunting their robes, much like how the color guard of a band would flaunt their ribbons.

The acting is quite overdone, at least in the cast I saw. It's as if each actor understands what emotion they are supposed to show, and then doubles up the ante just to make sure the audience gets the message that they are supposed to be ANGRY or SAD. Lines are often shouted or screamed, fights are overdone, and subtlety is not at all a recognized word. This, combined with the cheap-laughs nature of the lines that characters churn out, quickly remove the realism from even the most well-loved and familiar characters. And as mentioned, it doesn't help that the play centers around characters that we simply have no backdrop on or concern for.

In terms of the positives, I was thoroughly impressed with the stage's special effects - there's no shortage of stunts, whether it's floating desks, floating people, or a straight time warp light sequence that makes the entire stage look like it's vibrating. This did make the play very fun to watch, and certainly at the level you would expect from a Harry Potter stage adoption.

I have heard from friends that Part II is much better, so I do plan to go back and see that if only to round out the experience. I wouldn't say it's a bad way to spend 3 hours, as if you're in NY or London it may certainly be worth a view and most of the crowd seemed quite pleased with the production. I'm just a stickler for plot at the end of the day, which is why I can't give the play full marks despite being perfectly fine as an entertainment vehicle and as a little revisit for diehard fans.

Will update this blog once I see Part II, and do let me know if you have seen this! 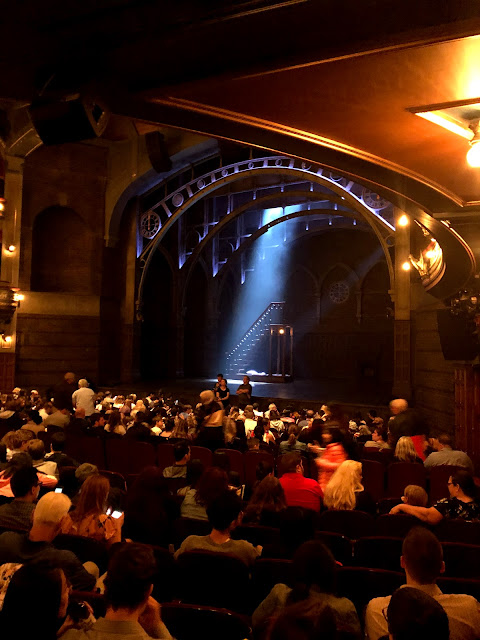