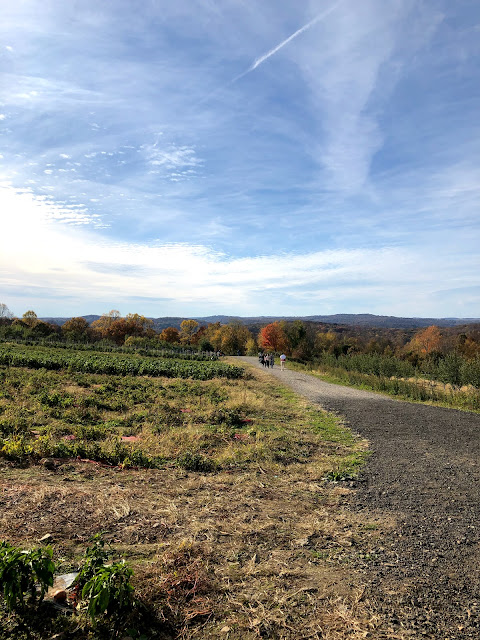 A popular New England activity that I'd never actually tried before is apple picking, which for New Yorkers means going upstate about 1.5 hours to one of the quaint apple farms and markets between September and October.

This year, I decided to brave the commute and headed to Harvest Moon Farm & Orchard and its neighbor conveniently across the street Outhouse Orchards in North Salem, NY. Note I don't have a car (as with most city-dwellers), so the ability to commute in via Metro North from the city was critical.

Below are my tips on getting in from NYC, as well as quick thoughts on both orchards. 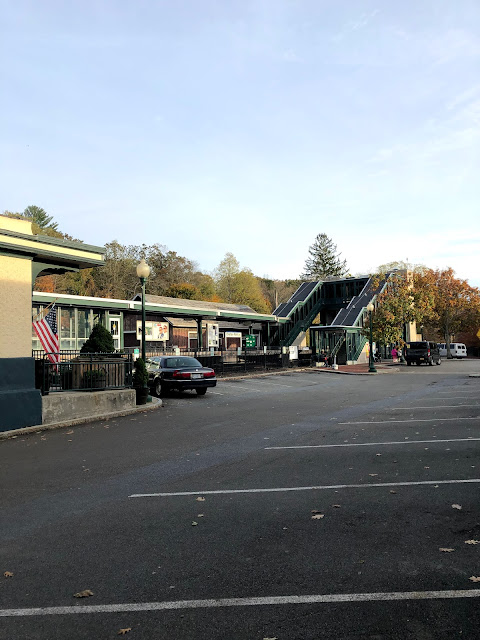 If you're coming in from the city, the best option is to take the Hudson Metro North Line from Grand Central to Croton Falls (saw many similar apple adventurers with us on the way up). The ride is 1.5 hours each way, and costs $15 each way / $30 roundtrip per person during non-peak hours.

Trains over the weekend come about every hour; download the MTA Train Time app to find when the trains depart (about every :10 after on the way there and :12 after for way back). Use the MTA eTix app to buy your tickets easily and have them directly accessible on your phone; you just activate the tickets when you board your train.

Once at Croton Falls, there's a couple solid options. There was a shuttle bus right at the exit of the station, charging $5 per person for an immediate ride over. Each bus sits 14 people and kids who can sit on your lap are free (you can see the black one parked in the right side of the photo). The guy was very friendly and gave a quick overview of the ride during the quick (probably less than 5 minute) 2 miles over. They also pick up from Harvest Moon's entrance before each train. They depart whenever the car is full, and I saw most people chose to load up about 30-40 mins before the train departure time.

If you miss the shuttle or if you have a larger group (say >2 people), I recommend getting an Uber or Lyft. We took that on the way back and if you catch a good time it'll be around $8, which means it's a much better deal for a group of 3-4. The challenge is there are few vehicles usually in the area, so you're in for at least a 10 minute wait for your car to arrive from Brewster.

There's also a cop monitoring the two-lane highway that runs between Outhouse and Harvest, making it a very smooth venture across the street to visit one vs the other. 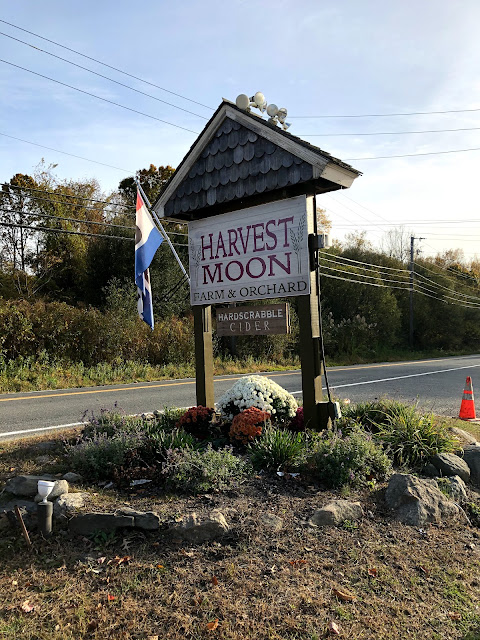 When we went this final weekend in October, the orchards were literally picked bare, or "Slim pickings" as they were hilariously dubbed. That said, they host a festival all of Sep / October so there was still plenty to enjoy. 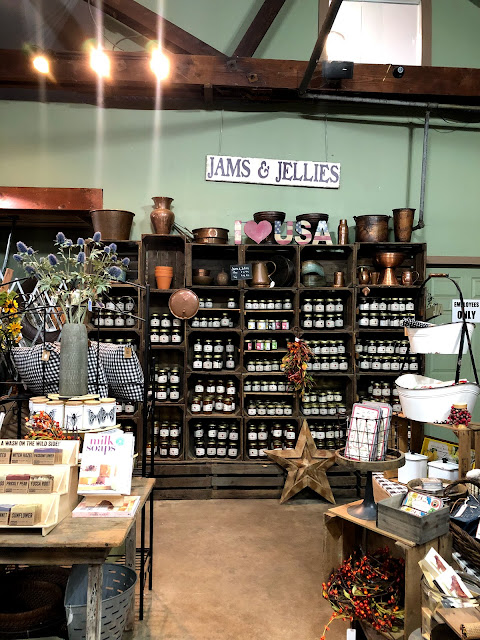 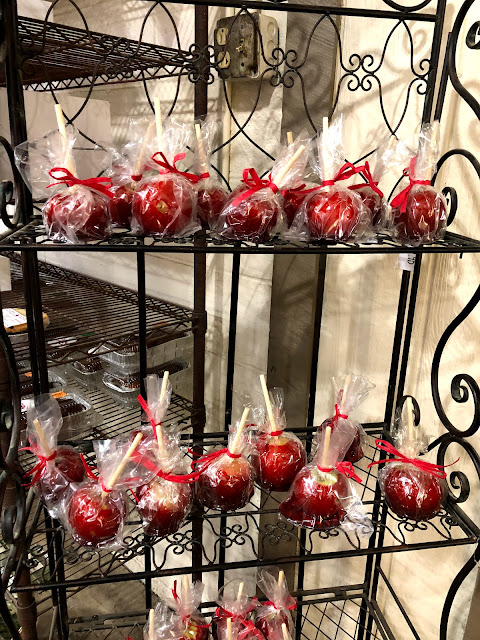 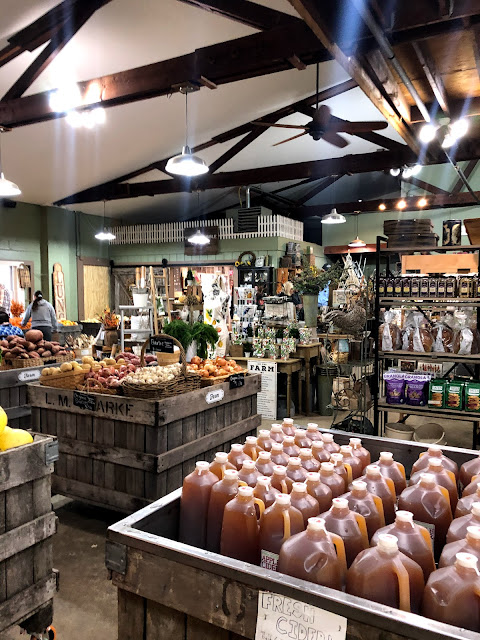 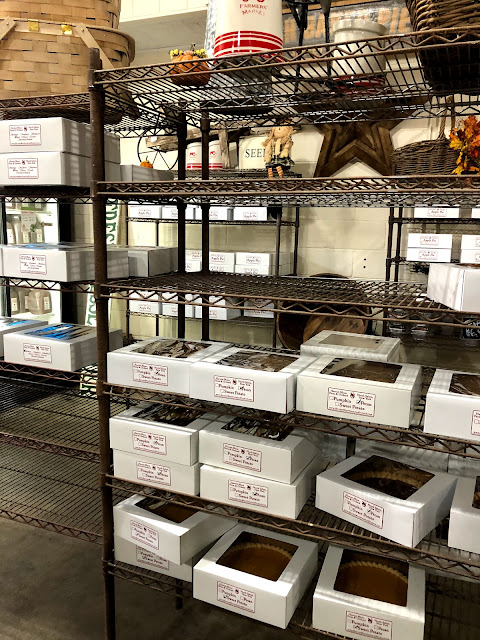 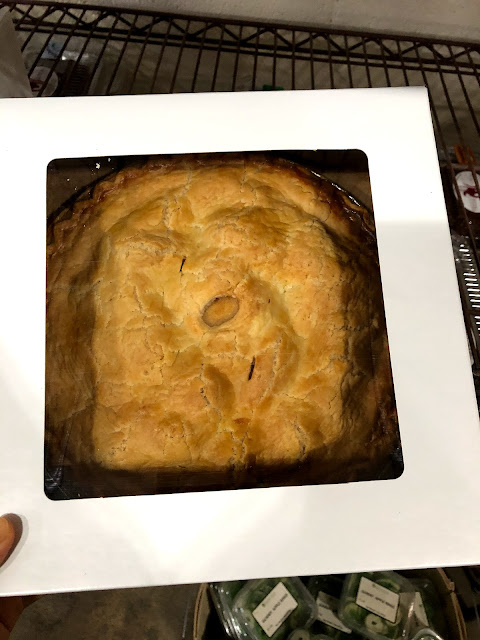 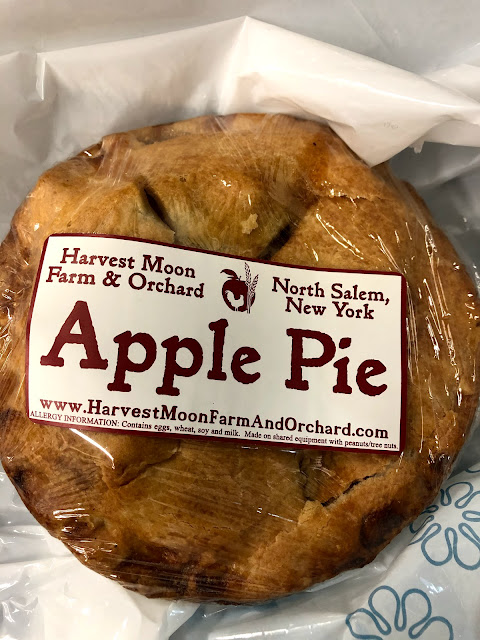 There's a market which is in the house right by the drop-off stop that sells fruits, bucket fulls of apples, and really delicious pie. We bought a mini apple pie for $8 and it was so very worth it - one of the best I've ever had. 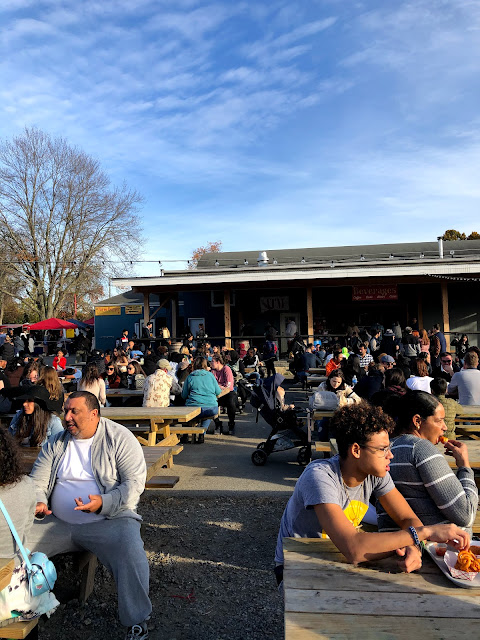 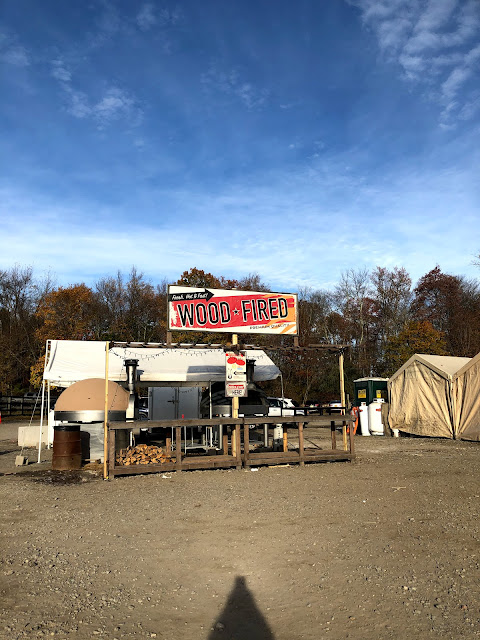 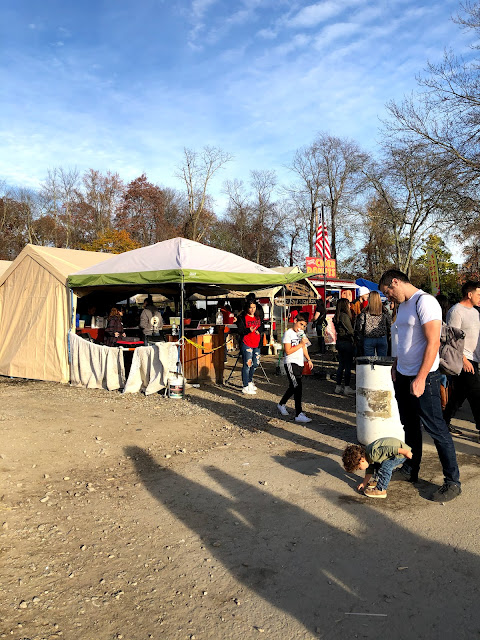 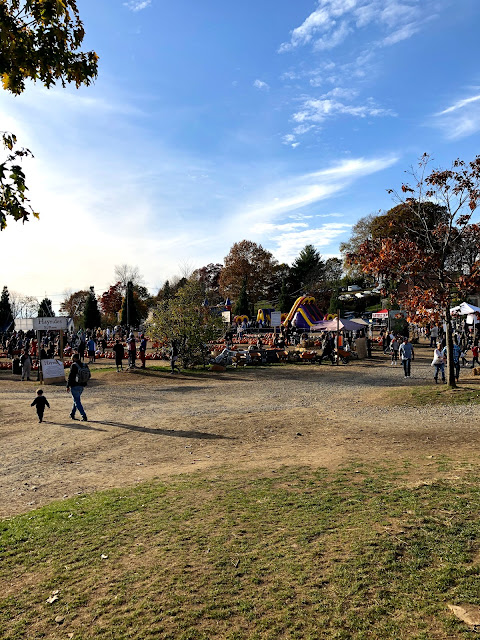 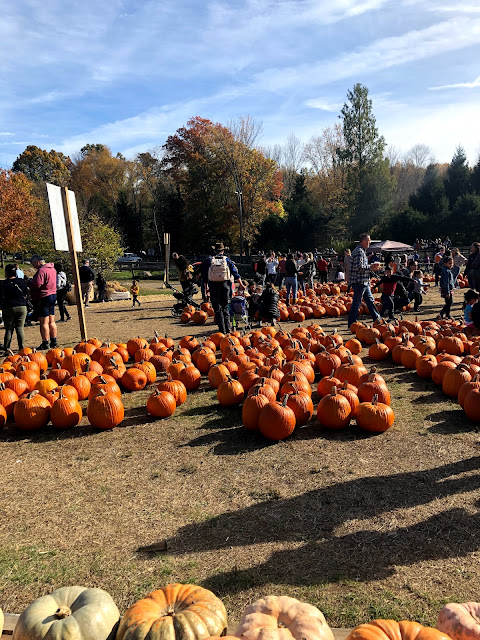 Behind the house featured a fair-type set up, with food vendors, a pumpkin patch, bouncy houses and a bungee jumping area. Harvest Moon is also known for their Hardscrabble Cider, which is a 6.5% alcohol cider that comes in either the dry (aka clear and more traditional) or unfiltered options. The dry was amazingly crisp and a big leap on the standard pre-bottled ciders in bars, so recommend giving it a try. I also had their hot cider from the cash register in the house, which I'd say probably isn't worth the $3 price tag 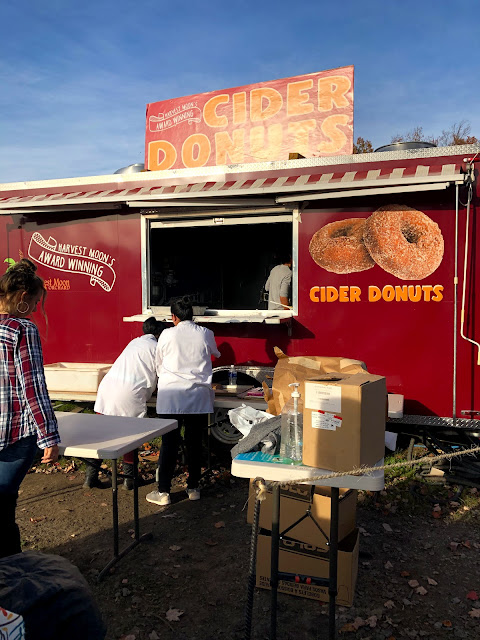 The downside to the food booths is there were very few this final day, and comprised of a jerk chicken shop in the back (which we had and which was just ok), a wood-fired pizza station, and a fried foods and BBQ station which perpetually had an intense line and sold turkey legs, fries, burgers, and all sorts of tasty things. That said, none of the savory food looked remarkable, so maybe eat before you come and then grab some cider donuts ($5 for 6, really tasty and fresh) or just enjoy some pie at one of their sun-exposed picnic tables, while the live band plays. 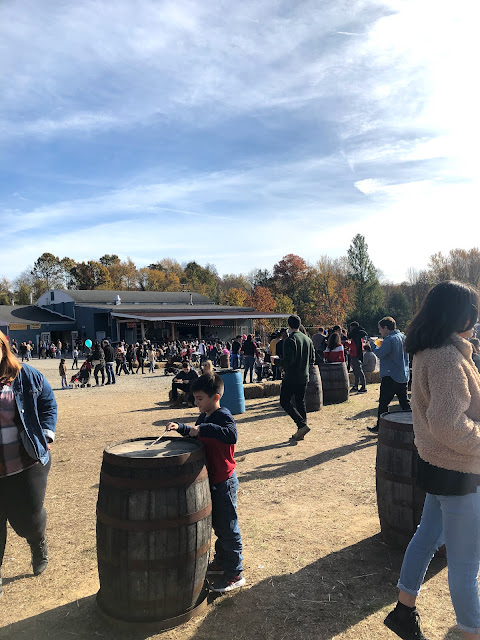 The area was fun to walk around and very kid-friendly, so a good day activity albeit a bit crowded. 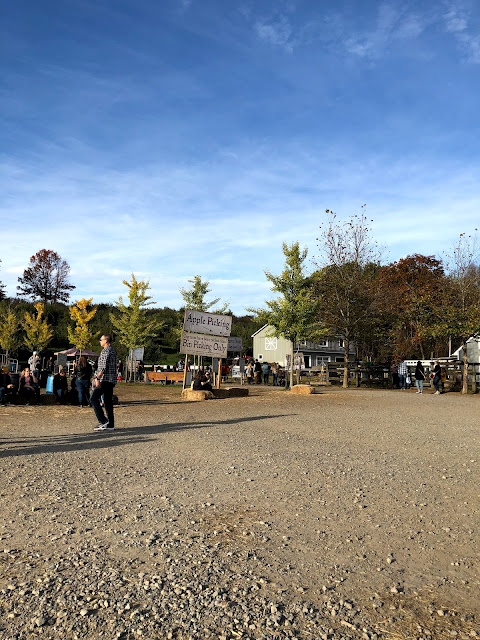 We didn't try going into the orchards, as it appeared you had to purchase at least a bushel bag ($30 for about 20 lbs) to let in a group of 5 adults. 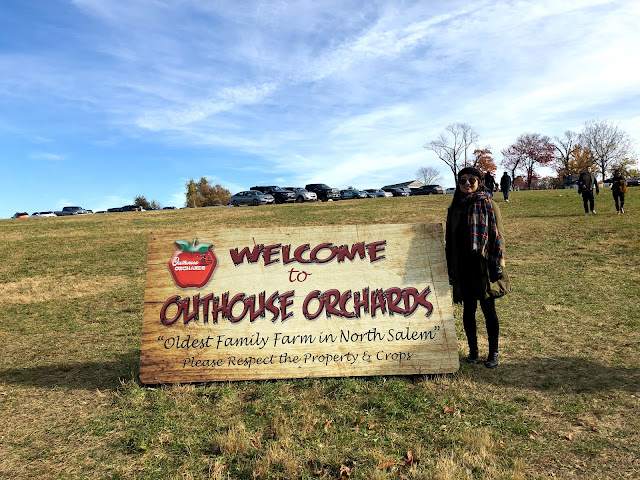 Outhouse had apples available for picking when we went, though very few from our quick stroll through. All the apples available were close to the top, so you had to take one of their long pullers (very heavy!) to collect even a few. That said, the grounds are much broader and were far less crowded, and they allowed even those who didn't want to purchase a bag of apples to venture forth. 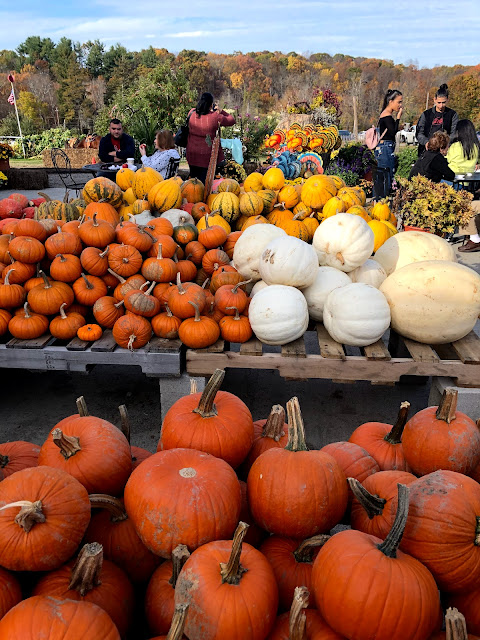 The views you can get of the foliage on the mountains is spectacular, as Outhouse sits on a hill above Harvest Moon (the view in the top photo was from here). It was a wonderful clear day out, and I would highly recommend going through their grounds. 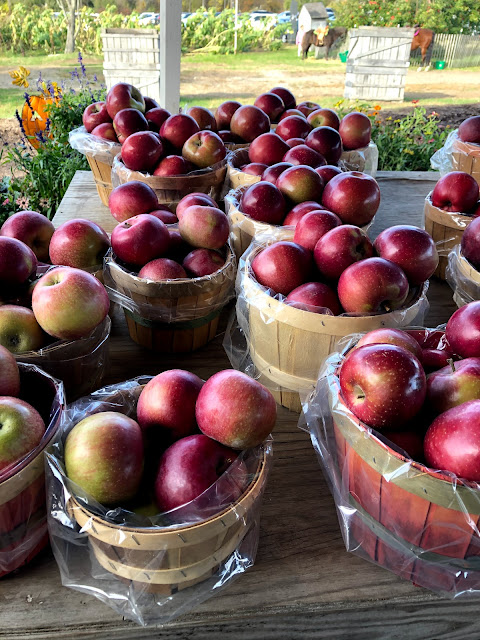 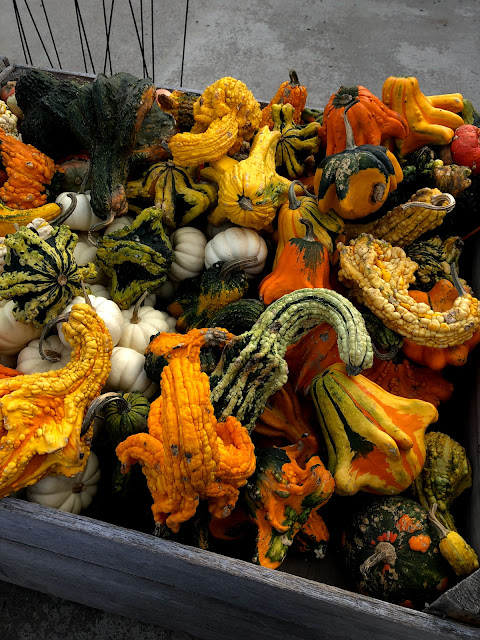 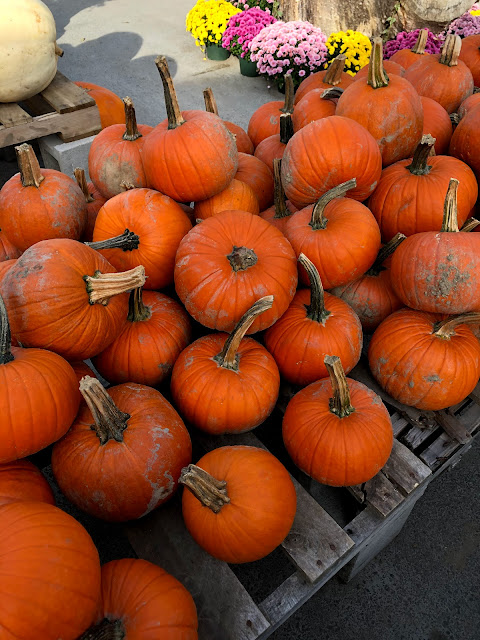 They also had hay rides and what looked to be a massive corn maze (gave me some In the Tall Grass vibes) plus a market as well, where honestly the baked goods and drinks looked far less appealing than at Harvest.

Overall, this is a wonderful weekend activity for a sunny fall day, and it's something I'd definitely do again next year. If you go, be sure to let me know how you like it!
Email Post
Labels: NYC Travel