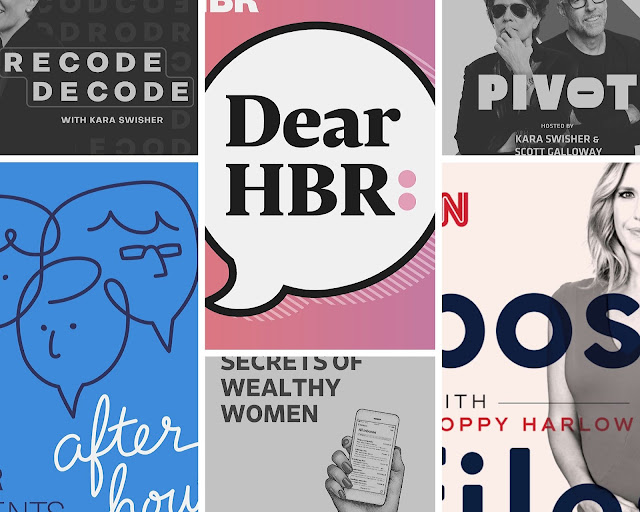 I've been an avid podcast listener for a while now, and my go-to genre is business topics and interviews. Podcasts feel like an engaging and often enjoyable way to take in the latest developments and get the perspectives of experts. I can also listen to them while cleaning or doing work that doesn't require full concentration, and over time I've accumulated a list of favorites, listed here for those who may be on the hunt for something new to listen to: 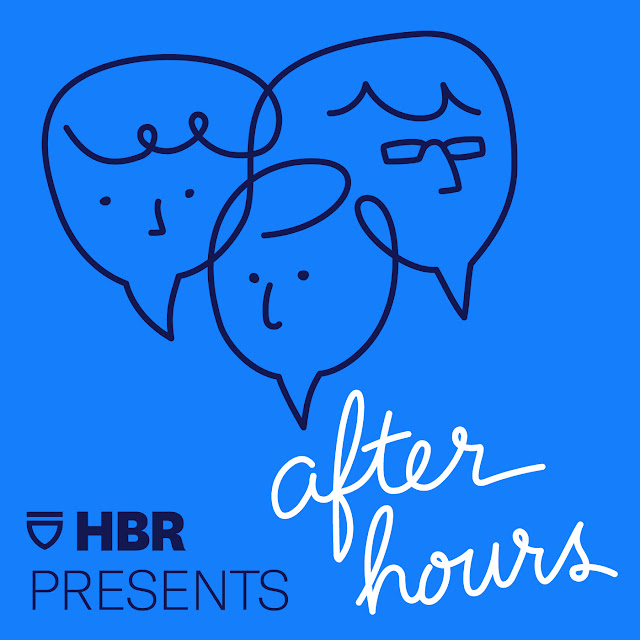 Hosted by three Harvard Business School professors (Youngme Moon, Mihir Desi, and Felix Oberholzer-Gee), After Hours is far and away my top podcast choice. It's not only informative, it's pure fun to listen to, and it's the only podcast where I've actually gone back and listened to every single past episode (and loved them as well).

It's currently on season 3, and releases weekly in digestible 30 min episodes (note that the show takes the full summer off each year, in alignment with the school calendar). The chemistry between the three hosts is pitch perfect, leading to not only thought-provoking debates but also hilarity as they rib on each other. The format of the episodes is that each week two of the hosts will bring in a topic (most recently, political ads and the Google-Fitbit acquisition) which all three will then discuss and shine their views on. The discussions aren't all equally compelling and at times it's quite obvious these three are all academics rather than industry professionals, but it's more than made up for by the hosts' charm and banter. I come out of each episode feeling like I've learned something and was entertained, which is all I could ask for from a podcast.

Along with the substantive discussions, which range from social issues to business and economic developments, the episodes cap off with each host giving their pick of the week. These vary from book recommendations to movie or TV show selections and even activities (Youngme this week recommended hosting family reunions around an event like a concert). They're varied and always pique my curiosity as someone on the hunt for fun activities and good recommendations. 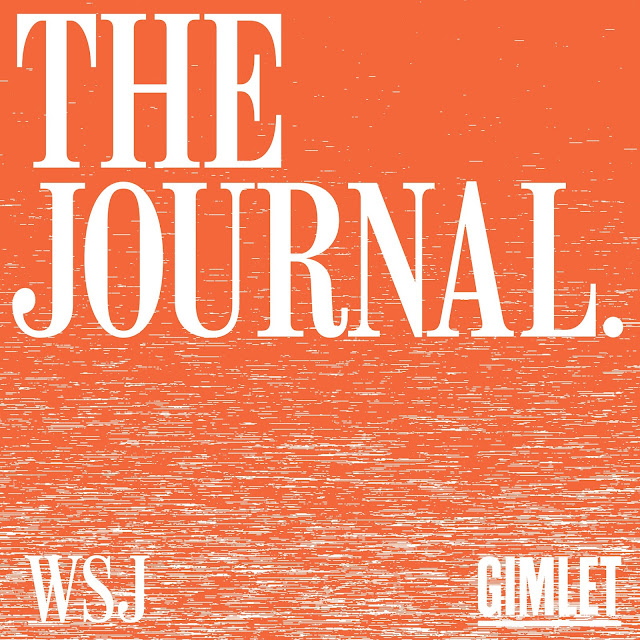 This one is newer on my radar, but I've caught myself listening to several episodes back to back and enjoying each of them. This one is more of a standard business podcast, produced by Gimlet Media and The Wall Street Journal, in which the hosts will interview journalists from the WSJ about the latest business and economic topics. It feels akin to reading an article in the WSJ, but in a more digestible and casual form. I find it quite engaging to hear from the journalists' directly as they discuss their findings and provide their views.

Some of the recent topics have included commentary on Adam Neumann's $1.7B exit package from WeWork, the legal and social challenges in the myriad of opioid cases through the lens of lessons learned from Big Tobacco, and the many local business implications of PG&E's blackouts in California. It's the right mix of educational, relevant and fascinating, with timely topics and smart discussion and insight. 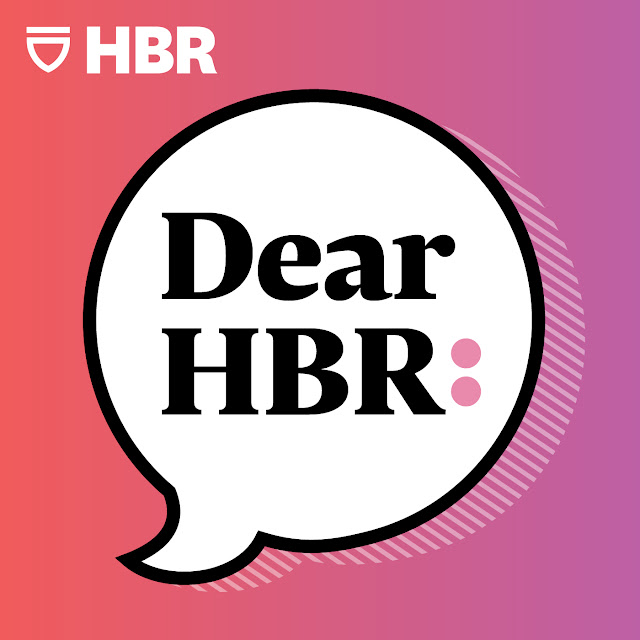 I admittedly don't love this one nearly as much as After Hours, as the hosts can at times come across as pretentious and the content generally feels less engaging despite the seeming relevance. That said, the topics are useful and I will give all of their episodes a listen, as who doesn't need workplace advice?

The premise for Dear HBR is that readers will submit questions relating to various workplace situational issues, which our hosts (Harvard Business Review Senior Editors Alison Beard and Daniel McGinn) will then give their advice on, usually with the help of a guest co-host who has done research on the topic. This can range from promotion challenges to navigating conflicts with coworkers and managers. It's a useful listen, even if at times you can feel exasperation with the hosts (working as an editor to the Harvard Business Review very much does not make them experts for unique job situations, a fact they seem to sometimes forget). I have seen some improvement in their open-mindedness though, and I find this a unique offering in an otherwise crowded business podcast market. 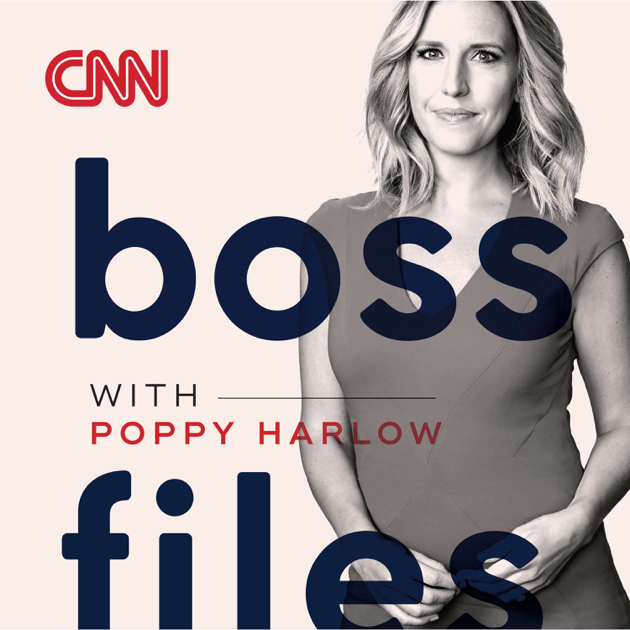 Hosted by CNN anchor Poppy Harlow, Boss Files features her interviews with some of the most high-profile CEOs. Recent episodes have featured Salesforce's Marc Benioff, Lloyd Blankfein and Alphabet's Sundar Pichai. It's less conversational and more formal, as Poppy is clearly a cable network trained anchorwoman, aka relying on lots of research from a behind-the-scenes team and pre-sketched questions during each interview. That isn't to say the topics aren't good or relevant - indeed, they are well thought out and mostly very good, but the questioning style can feel scripted and almost timid.

While she has clearly a large rolodex from her years as a top anchorwoman, one can tell that Poppy is also intent on not burning bridges with any of her interviewees. Tough questions, while crisply and articulately asked in her brand-name baritone, are rarely probed into beyond the superficial. I have noticed an improvement with time, as she adjusts to the more casual conversational style that listeners of podcasts have come to expect, but the episodes still hold a formal tint. One can practically hear Poppy trying to win over these leaders, whether it be through planned name drops or attempted personal probes. A good series overall though for the leaders it attracts. 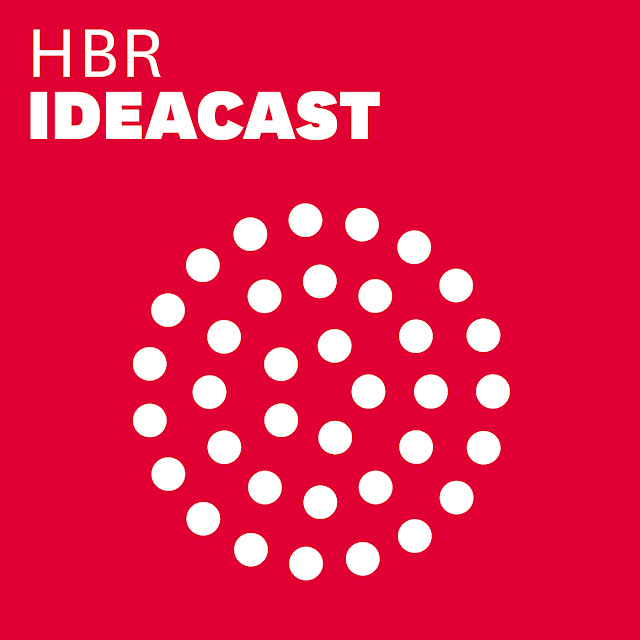 Hit or miss, some topics are very interesting, but others feel like a dull waste of time. They bring in researchers to discuss their findings from recent articles published on the Harvard Business Review, summarizing their key findings. A recent one worth listening to was on How Dual-Career Couples Make it Work which was short but interesting. 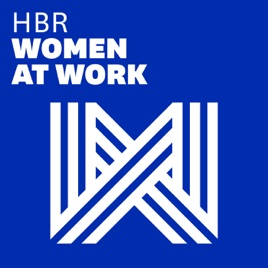 Season 4 has just been released, which I still need to binge over. The seasons so far have all been superbly made, featuring highly relevant topics for any woman out in the workforce. The discussion is thoughtful, there's plenty of research cited, and it focuses on tackling some of the most difficult challenges that women face, from the pay gap to promotion and cultural challenges. Worthwhile for sure. 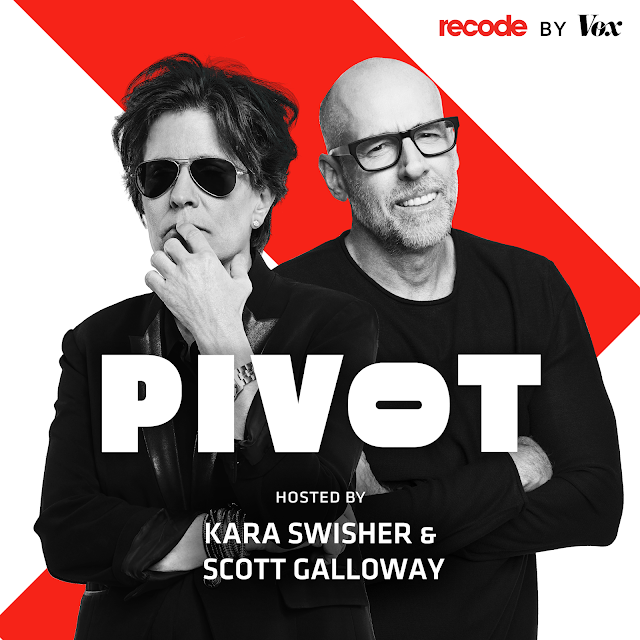 Created by Vox Media, Pivot is a 30 minute weekly (soon to be twice weekly) series where hosts Scott Galloway (NYU marketing professor) and Kara Swisher (journalist and founder of Recode) sit and discuss key topics across business. It's incendiary and they don't hold back their opinions, which is both refreshing and at times aggravating. This is a podcast that isn't afraid to speak out about the faults in our capitalistic system (in fact, at times it seems focused on making all of us outraged anti-capitalists), but the insights are real and it never fails to capture my attention.

The reason I'm not giving this one my full accolades is that I find the hosts fundamentally annoying in their very blatant arrogance at times, although they've slightly grown on me through the episodes. It won't be for everyone, but as someone interested in the technology industry, there's important topics that it highlights. The WeWork discussions were fascinating and are no doubt what really brought them to people's radar, and it's nice to hear a sounding board for other developments, including more controversial ones. 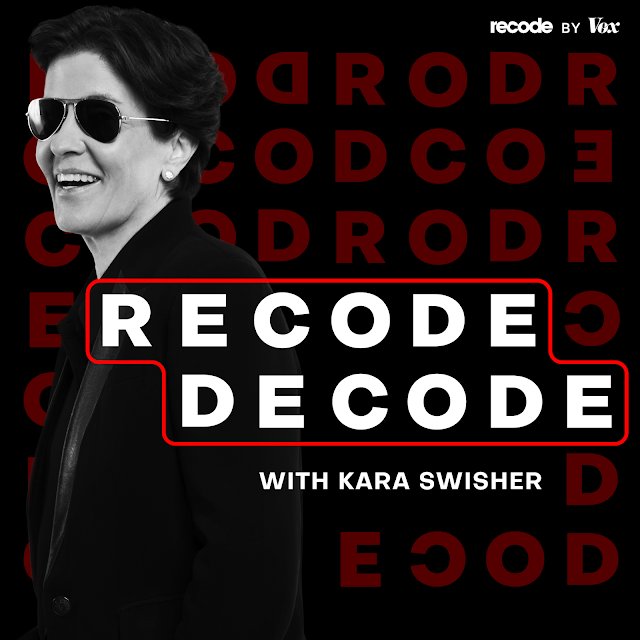 Also created by Vox and hosted by self-proclaimed Silicon Valley big-shot Kara Swisher (who I'd never heard of prior to this), Recode Decode is an interview series where she brings on often very high profile guests (think C-Suite level across major companies) to discuss developments at their firms and across the tech industry. With the fervor of passionate views around Big Tech recently, the topics she brings up have felt more timely and significant.

As with all interview-series podcasts, this one is very dependent as well on the guest. Kara herself is certainly not for everyone, as she can come across as highly self-centered with lots of self-adoring language and humblebrags sprinkled throughout the episodes. That said, she is direct and she doesn't try to curry favors with her high-profile guests, which is appreciated. I could do with a few less unfunny jokes on her sexuality and less of our host's name drops, but for the right guest I will give this one a listen. 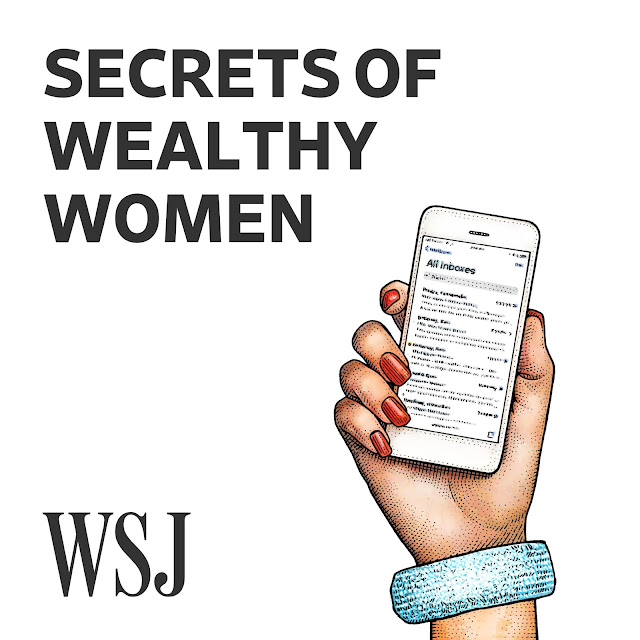 Produced by The Wall Street Journal, Secrets features select interviews with women leaders and entrepreneurs. The content is generally hit or miss, hence why I rank this below Women at Work, but they do get good interviews and there are decent nuggets of investing and personal advice buried into the episodes. 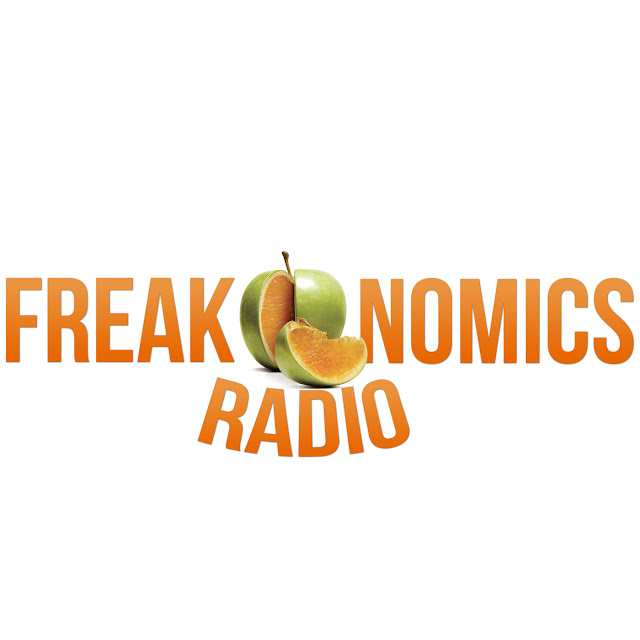 An unconventional podcast that delves into a wide range of topics and probes deep on each. Probably my favorite episode so far has been Should America be run by...Trader Joe's? which all fans of the grocery franchise would enjoy. For fans of the original Freakonomics book series which initially presented the controversial relationship between abortion and crime, you'll probably enjoy listening to the sequel in the episode Abortion and Crime, Revisted which brings back the researchers from the original book and reanalyzes the data with 20 years of further data points.

This is a podcast that brings the research in to back things up - everything is seen through an economic and research lens, which sheds new light on some big topics. It's very different from the other podcasts on this list, and for that I really appreciate.


I'll keep this a running list and add to it as I discover new favorites, so check back and also do let me know of your favorite podcasts! I'll do a more fun focused one once I get enough on the list!
Email Post
Labels: Other Entertainment Podcasts