A Weekend in Austin, TX 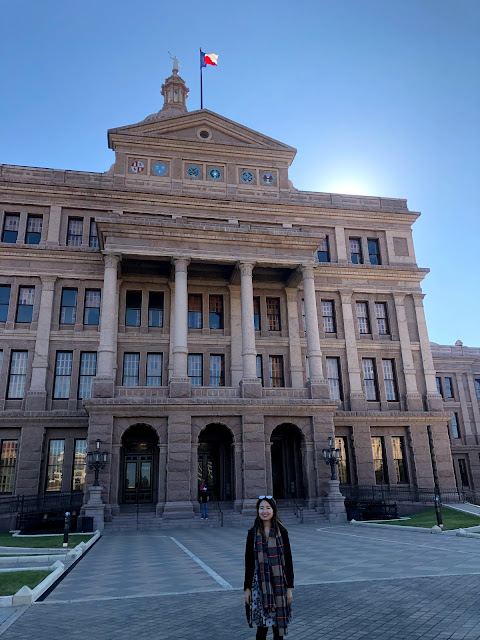 Back in November I had a chance to spend a weekend in Austin, TX. It was filled with food, music and no shortage of sites and places to visit. Here's the itinerary we followed and all the stops we made: 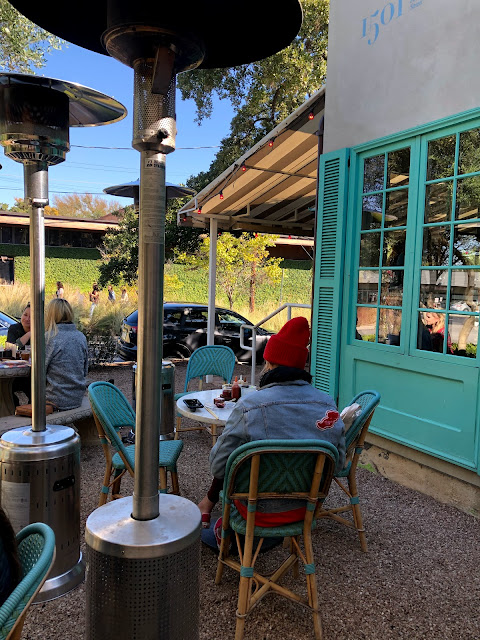 Brunch at Elizabeth Street Cafe: We had a mixed experience here. It's a place I would deem overhyped, full of trendy cute decor and lots of young (largely touristy) visitors. The service was also rather spotty, with an ordering mishap that resulted in a 30 min delay for me to get my food, although the server recognized and awarded us with freebie dishes to compensate. 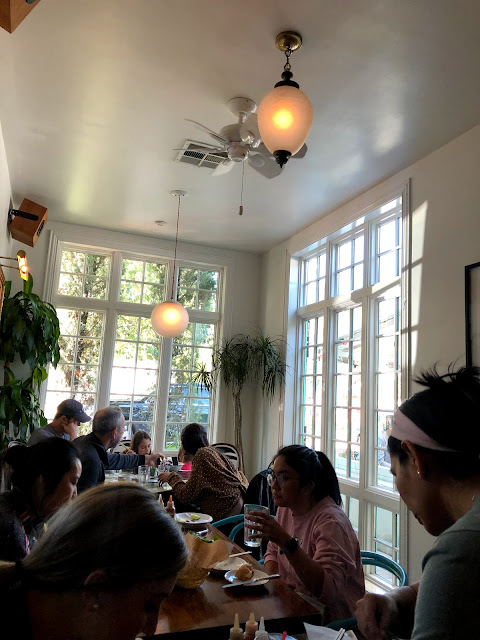 That said, the food is reliable and will satisfy, whether you are a fan of traditional Vietnamese cuisine or not (things definitely have an American twist, so don't go in expecting the most authentic meal). 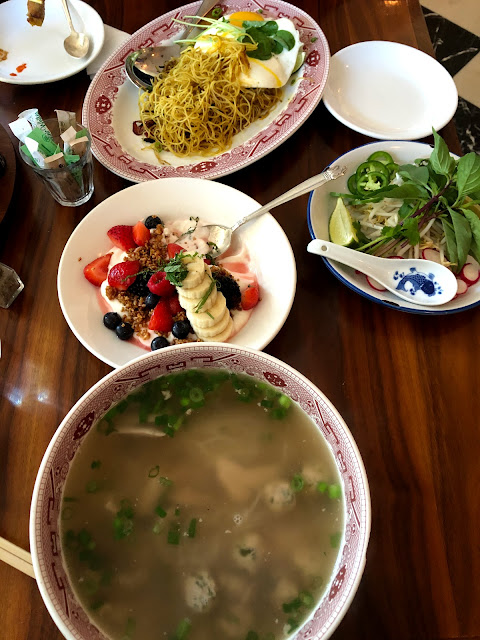 I will call out that the apparently renowned Chicken Pho was in my experience exorbitantly bland, like a poorly seasoned chicken soup with a sprinkling of noodles, and certainly not worthy of the $16 price tag (another thing about this place - it's priced up for the hype). The Baos on the brunch menu, while tasty, are also notably unsatisfying and small in portion size, so beware if ordering.

So perhaps worth a visit, but not one I'll be going back to, especially with all the other great eats in this city. 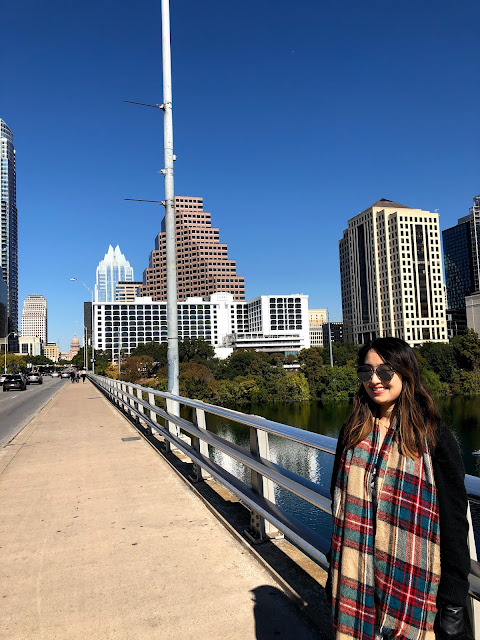 The nice thing about Austin is the ready availability of scooters anywhere you turn, especially in the key tourist spots like along Congress St. 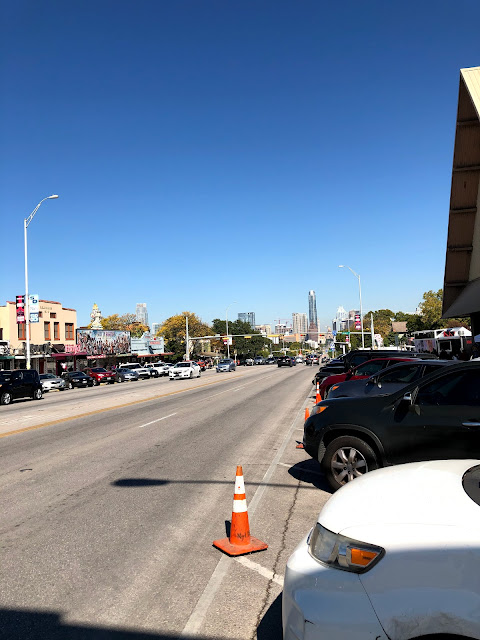 They're not cheap per se (tip for you - use the non-Lyft or Uber branded scooters, as those are usually significantly cheaper, although it will mean you must download the app in advance). They're fun to try out, and even though I don't have the best sense of balance I felt reasonably comfortable going along less dense sidewalks with them. 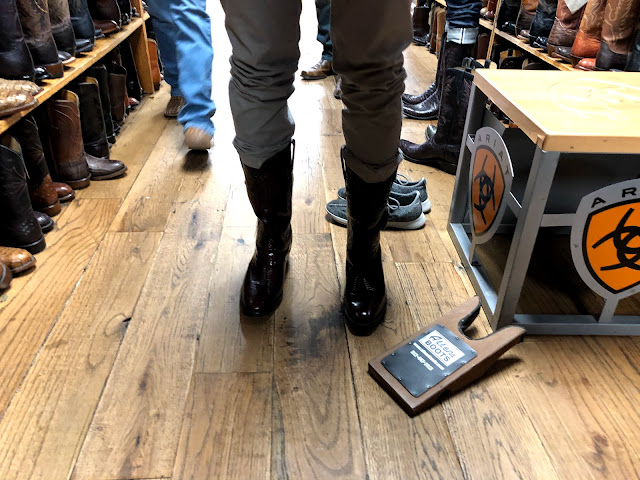 South Congress in general is a tourist hub, lined with little storefronts (including the above leather boots store!) and restaurants, which make for a diverting walk. 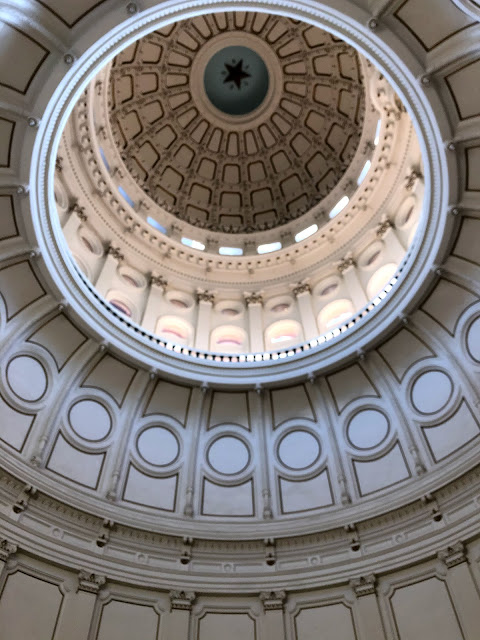 If you continue down South Congress through the downtown areas, you'll eventually find yourself at the State Capitol, which is always worth a visit, if only to get a feel for the government offices. It's as most capitols are, very manicured and well-maintained, with portraits of all of the governors of Texas lining the various floors. 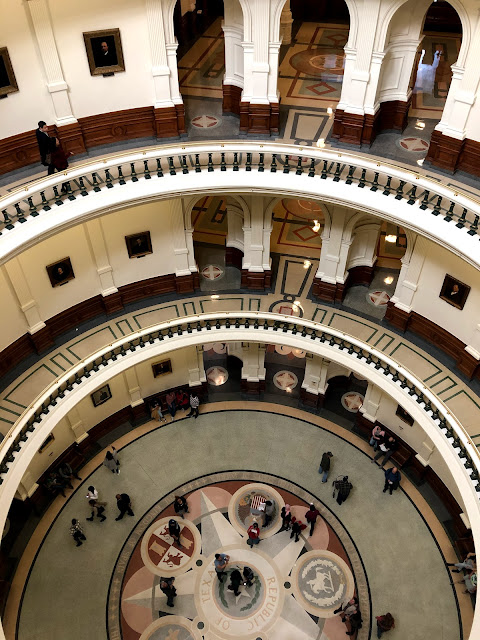 You can also visit the House and Senate rooms, which are interesting to look at, and again very well maintained. 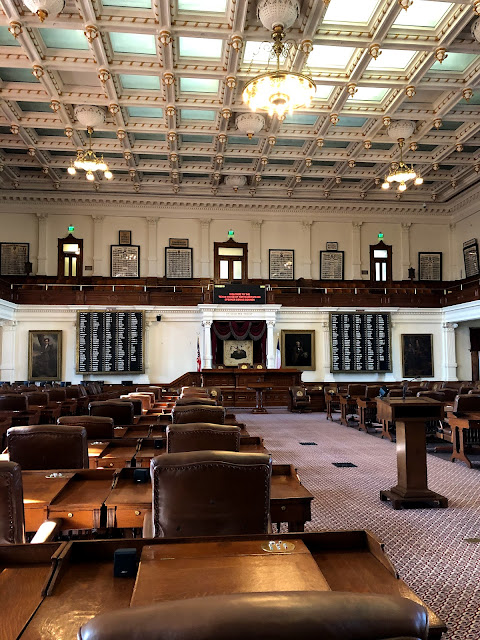 Uchiko
This was a notable food win, with lots of innovative and very fresh tasting sushi and Japanese dishes. We enjoyed the ambiance, which was dark but trendy (and crowded even at 5:15PM!) 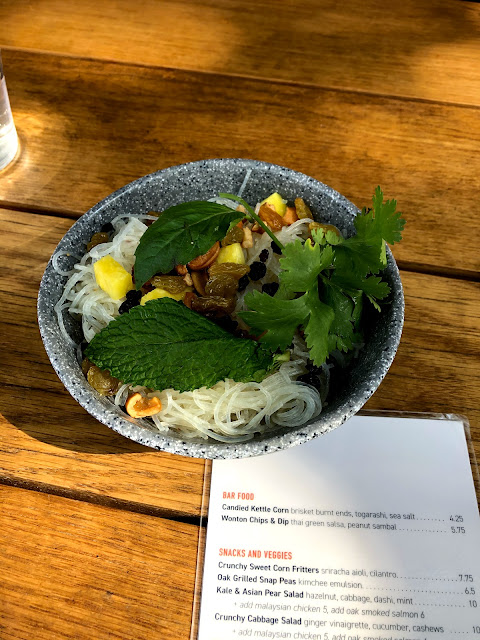 This was probably my favorite food place of all, with such unique and incredible flavors in every dish. Loro is essentially an Asian-inspired BBQ joint, meaning you get all the BBQ classics but with the added umami of Asian spices and lots of tasty side dishes. The kimchi edamame was a standout, with such a bold taste. 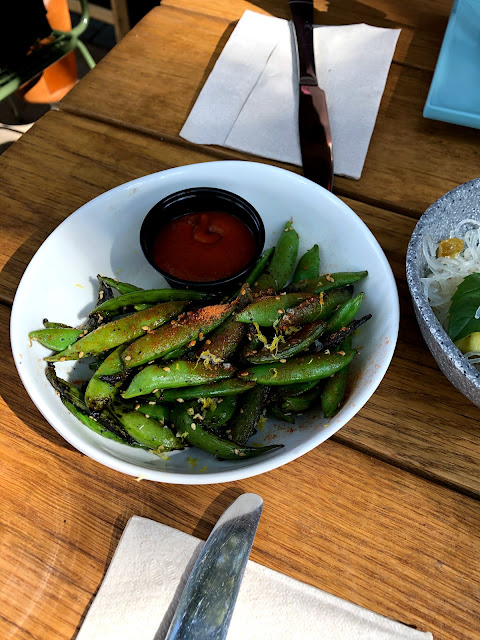 I ordered the turkey BBQ, which came with apricot jam and and crispy pieces of chicken skin to pair with. The ambiance is also great - it's a bit out from the city (at least a 20 min drive), which does mean a more spacious dining interior, as well as plenty of outdoor seating and an area with swinging seats hung from trees, which we saw a number of kids enjoy. The staff was also very attentive and the service was quick, so all in all just a great experience. 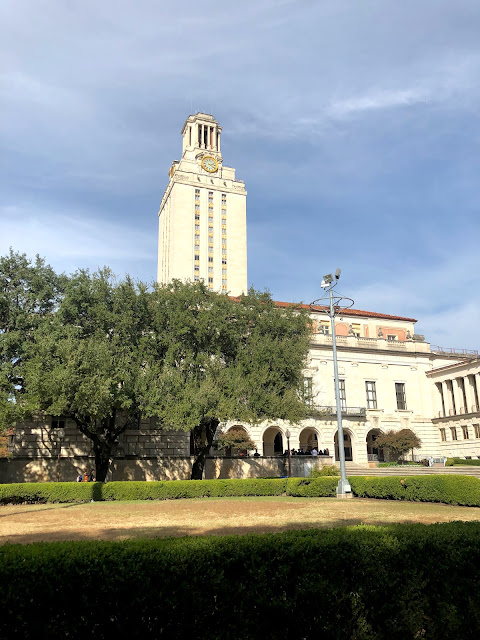 UT Austin's campus spans north of the Capitol, and made for such a pleasant walk. Be sure to walk by the turtle pond, which is populated with a very impressive number of turtles despite being right in the middle of what must be a bustling campus. There are plenty of scooters though note that there are only specific zones where you can park them. A very serene campus

Drinks with a view at the Four Seasons 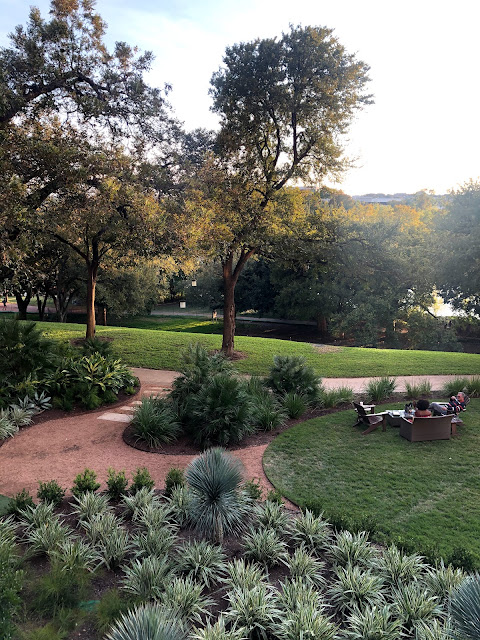 Even if you aren't staying in any of the 5-star hotels in the area, you can pop in for a drink. The Four Seasons featured a beautiful bar area with sweeping views, as well as an open patio area where you can sit and enjoy the view of the river. It's also a close walk to the bat-bridge, which you'll hear about next 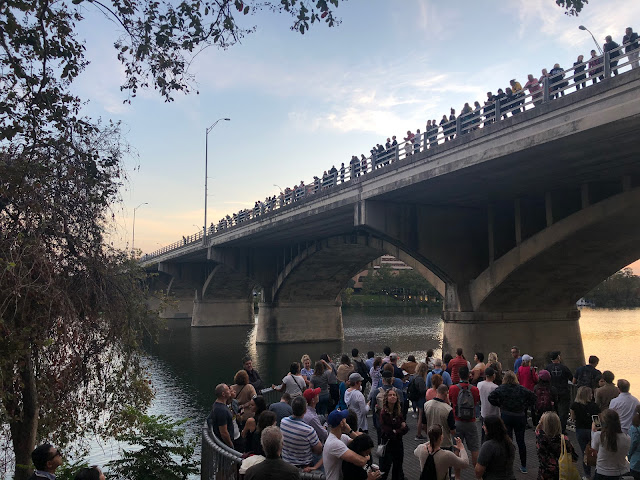 The Ann W. Richards Congress Avenue Bridge is known for housing thousands of bats, and during their peak season (from summer through October) they will come out in a swarm for feeding right at sunset. While we were out of season and thus only saw a few of them emerge at a time, you could hear them rustling around and zipping about. 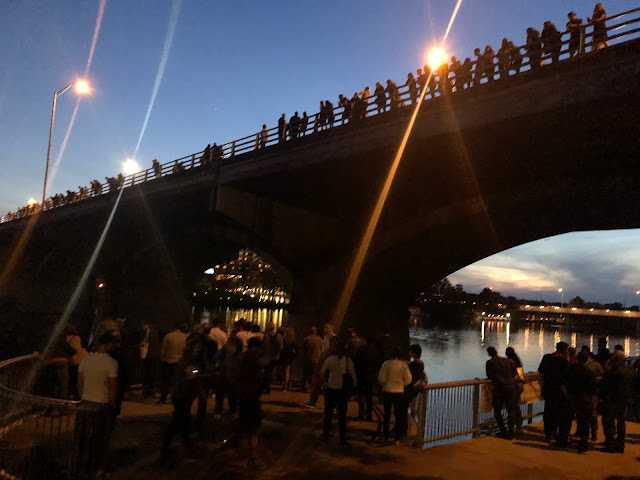 Dinner at Fareground
A food court located right off S. Congress, this one features a variety of eats, from Israeli (which I had above) to tacos and sushi (below). Everything is fresh and tasty, although I may opt for the places below next time. 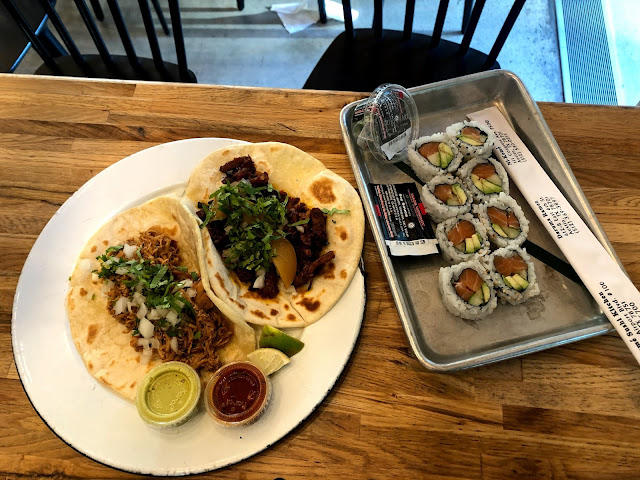 On another night, I went out on a music venue tour of Austin's music scene. I don't necessarily recommend the tour, which felt rushed and at parts disorganized, but it was useful to get a sense of the popular spots. We learned that unlike Nashville, music in Austin is meant to be savored, so think more of seated audiences watching the performers rather than the typical honky tonk. Here's where we went: 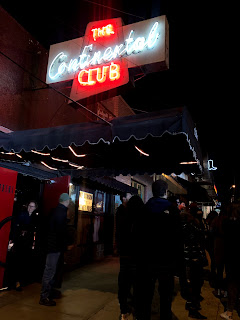 The Continental Club: Features live music / singing. A bit overbearingly loud, but a very intimate environment with lots of people just sitting in the rows of seats set out in front of the stage. 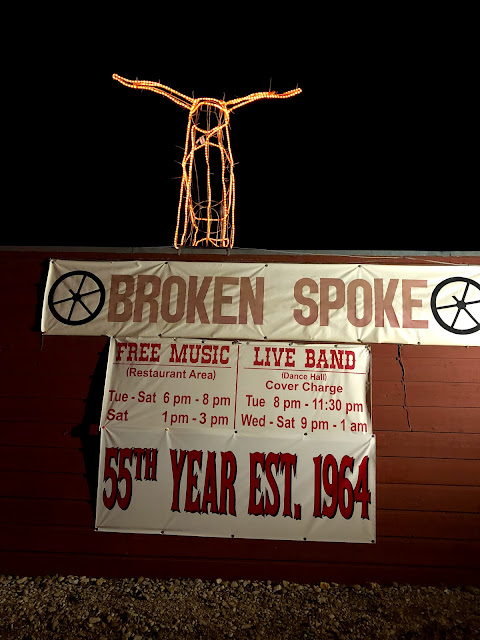 Broken Spoke: This was a very cool place, in that it features an active dance floor where patrons can go in and dance in couples. It was quite packed when we went, even late on a weeknight, mostly with older couples. A really cool environment. 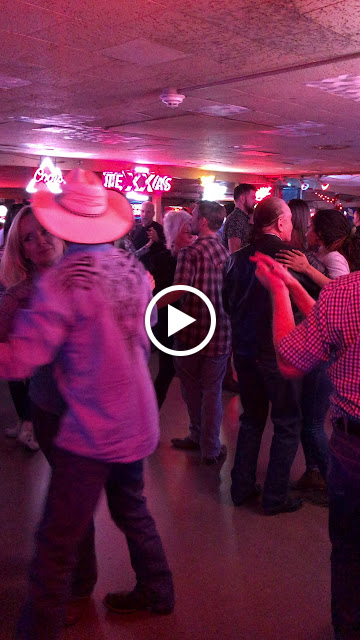 We stayed at the Kimpton Van Zandt, which was great in the sense that it's literally right off Rainey Street (a bustling bar district) as well as an in-house restaurant and pool area with cabanas called Geraldine's. I would say that there was a bit of overpromising and underdelivery on the part of the perks supposedly offered (e.g., the free coffee the cafe downstairs serves up each morning requires a 20-min wait and is one of the worst I've ever tasted, while the supposed free 5-6PM margaritas they serve up each day never materialized, even after nearly 30 mins of waiting in the area). Will also caution that the bathrooms feature sliding wooden doors, which while aesthetically pleasing are not only completely useless against blocking any type of sound, but also mean you're subject to the drying effects of the bathroom fan in your whole room.

I also stayed at the Omni Downtown during the week after, which is a more traditional hotel, conveniently located in the central downtown area.

Places I will visit next time:

The Roosevelt Room: This place serves up cocktails themed by decade, and is meant to not only have great old-school decor but also very tasty drinks.

The first-ever Whole Foods store: It's a bit out of the ways, but I heard from others that it's large with a ton of selection. I was overall impressed by the supermarkets here as a whole, as Central Market, which we dropped by for gelato after Uchiko, was also really pleasant to explore and well-stocked with tasty goodies.

Veracruz All Natural Food Truck: Have heard great things about this place, and even got all the way to the location (which as a heads up, features a really poorly paved parking lot and is basically in the middle of nowhere). Sadly, the day we went the weather was in the low 50s with blasting winds, and the lady at the counter informed us it would be a 45 minute wait for our food, which felt unbearable given that the seating is all outdoors.
Email Post
Labels: Travel