What I watched over the holidays 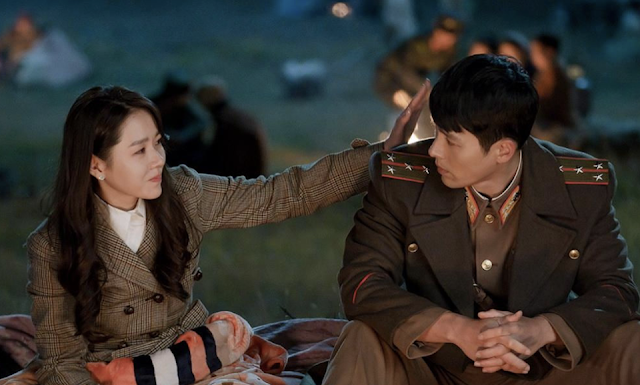 The holidays are nothing if not for the time to binge dramas and movies. With all the new streaming platforms, the options are vast, and I had quite the few weeks of doing nothing but sitting and watching everything I could. Here's my quick takes on all the new shows I caught up on:

Crash Landing on You 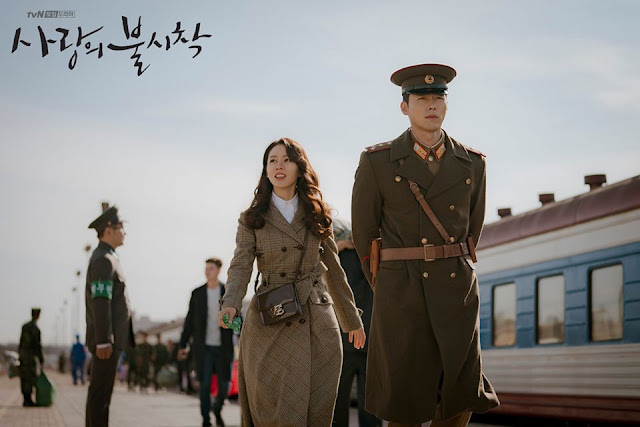 I was very skeptical of the plot, as the basic premise for this drama is cheesy to the point of cringey. But six episodes in and I'm very much won over to the high stakes and forbidden romance at the core of this story. Son Ye-Jin plays a South Korean heiress who paraglides into North Korea through a freak accident and meets Hyun Bin's North Korean officer. The story so far is focused on their journey to try to get her out of the country safely, with a natural high-stakes feeling imbued by the setting. Indeed, what the drama does well is balance the farcical and romantic moments with the serious, making you truly feel the stakes in the story.

Even though the baseline scenario is absurd and Yoon Se Ri is over-the-top and at times idiotic in her behavior, the North Korean environment is filmed with a solid attention to detail and sense of authenticity. The power outages, the scenes in Pyongyang, the scenes in public venues and the behavior of the North Korean characters all feel like we're being given a glimpse into this secretive society. Hyun Bin's Ri Jung Hyuk also has his timeless mix of reserved and swoon-worthy, making for a very easy to root for hero. He has solid chemistry with Son Ye Jin, who as annoying as she can be is given a sympathetic backstory as a hated bastard child in her rich family. All in all, I find myself won over the story so far and curious to see more of the interactions between all the characters now that Goo Seung Joon and Seo Dan (the second leads) are also in the picture. 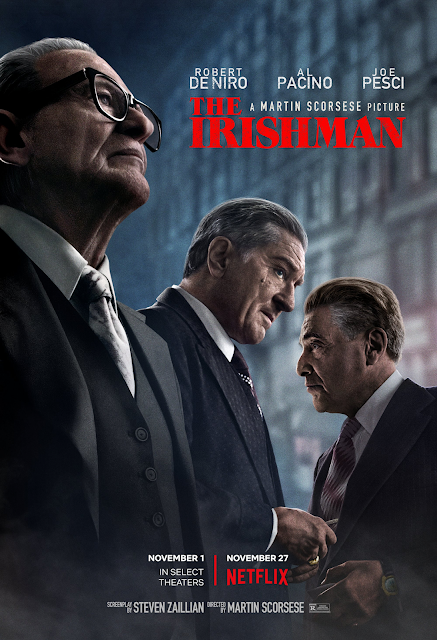 It's a marathon of a movie at 3.5 hours, but it's surprisingly watchable and the ending really delivers in a painful yet powerful way. What I didn't realize until after I watched is that the movie follows the course of life for three real men, Robert DeNiro's Frank Sheeran, Al Pacino's Jimmy Hoffa, and Joe Pesci's Russell Bufalino. It's also a reunion for DeNiro and Pesci with director Martin Scorsese, nearly 3 decades after Goodfellas.

You have to at least have a passing interest in crime and Italian mafia dramas, as The Irishman revolves around this world, but that said even though I'm not the biggest watcher of this genre I found it entertaining and enlightening. It's a dark though decadent environment, with men who are forced to be violent and heartless with everyone around them. That said, I would find this tough to finish in one sitting, as the world can also be slow and a bit dreary.

The backwards-aging effect Scorsese used on his three main stars (all now in their late 70s) is interesting and not always consistent or successful, so I do put that as a major flaw. The trade-off is you get literal acting legends in rich character roles that they get to build on for the entire run time, which create a surprising attachment in the audience for each of them and makes the ending all the more impactful. Worth a view, though pay attention as the intricate relations between the characters is something you have to watch to understand. 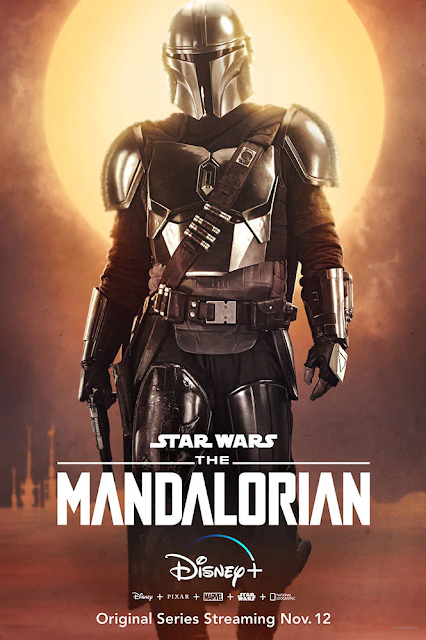 For a show that hides its main character's face for nearly the entire run, The Mandalorian manages to get you surprisingly invested in both the hero and the cute little midget sized Yoda he's protecting (not actually Yoda for the record). It's a very easily bingeable show, clocking in at just about 4 hours of content, with eight action-packed 30-min episodes. The music is one of my favorite parts of this, with a new soundtrack that's decidedly space-like but also unique versus the overplayed Star Wars anthem.

Our hero represents one of the last remaining Mandalorians, with a briefly-hinted-at tragic backstory and fighting skills far surpassing any of the other heroes in this franchise. The show properly calls upon our sympathies, joining a gruff but kind and highly capable hero with a vulnerable but hiding secret powers adorable child and a surrounding staff of unique and interesting fighters. Even though screentime is short, everyone makes an impression and the story propels forward without ever letting up on intensity or action. It's a solidly enjoyable show across all accounts, and meets the great hype its seen online. 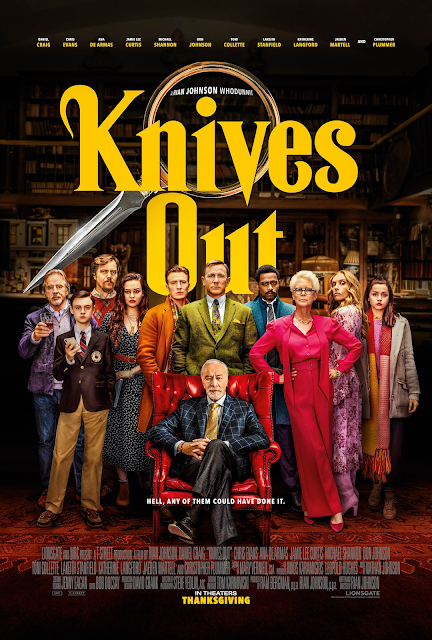 People should have started making Clue-type murder mystery movies ages ago, because they're so fun. There's nothing better than putting together a big dysfunctional family and adding on a complex, motive-rich murder and letting the detectives get to work. It's even better when the twists are unexpected and the characters full of unintentional hilarity, which Knives Out successfully melds. The movie is subtle yet very funny, keeping you entertained throughout and eager to see where the plot leads.

I loved Daniel Craig in this and found him to be far more likable here than his 007 counterpart. He plays the main detective, who speaks with an almost intentionally bad Kentucky drawl and manages to fumble about even as he quietly cracks the case. He's paired with newcomer Ana de Armas (who will be rejoining him in the next Bond film), who plays a Hispanic nurse who sits at the center of the entire mystery. I would say I wasn't quite as won over by her performance, which felt stiff and didn't make me root for her character nearly as much as I wanted to. There's a somewhat cliche but also original twist to the ending, and all in all this is solid writing and directing at work. 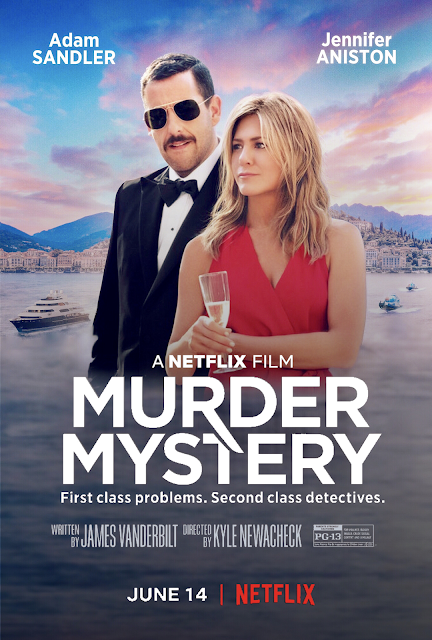 Apparently this was one of Netflix's most popular offerings of 2019, and I have to say I thoroughly enjoyed it despite it being a much more low-brow, at times downright stupid rendition of the same Clue-type mystery. It features Adam Sandler and Jennifer Aniston as a married couple that get caught up in a rich family's murder drama after a chance encounter on a plane, and what ensues is a hysterically ridiculous chase lined with murders and bad jokes. The writing definitely could have been toned down here, but Sandler and Aniston somewhat scrape by on their charm and star power, and the murder mystery itself is unpredictable and fun. The side cast of characters is as ridiculous as the leads, offering a quite literally diverse mix of backgrounds and comedy.

The film is also set in Monaco, and features plenty of lush, summery backdrops across mansions, beachfront waters and yachts. No doubt all the budget went there, but it does make it a fun visual sprint as we get to enjoy the European trip with our less than sophisticated couple. A perfect summer movie, and very much an enjoyable watch despite its flaws.
Email Post
Labels: American Binge dramas Crash Landing on You Dramas Update Hyun Bin Korea movies Son Ye Jin