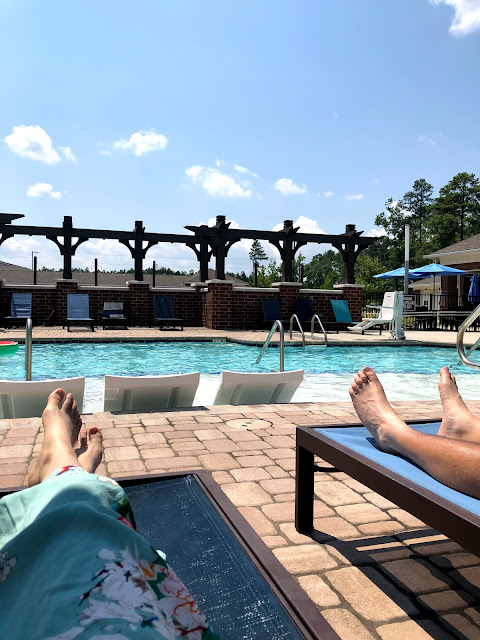 This is definitely going to be a change of pace from my usual Kdrama reviews (and to be honest, it's been ages since I've invested in and finished a Kdrama in full - the closest I can think of is Nevertheless which maybe I'll discuss in a future post.) Today's post is something I hope will be enlightening, entertaining, and just slightly stressful. I'm certainly hoping I'll find some release in writing this all down and sharing it for the world. It may be a series as well, so stay tuned!

Back in May of last year I broke up with my long-term ex, after a 4 year relationship. Even though I'm in my early 30s at this point, that relationship was my first in all regards - from the physical to the emotional. I truly thought that I would be marrying that person, but at the end of the day the relationship fell apart. He pulled the trigger on it, which I'll be forever thankful for as I don't think I was even aware until after of all the issues. This isn't the purpose of the post (oh no, it gets much worse with the relationship we're about to dive into) but in essence that relationship fell apart due to lack of physical chemistry, a 6-year age gap (in which he was younger), and a lack of commitment certainly on my side to understanding and giving him the emotional affection he needed. Of course there were problems on his end too, such as a perpetual unwillingness to provide acts of service (he complained about having to bring me coffee everyday while we were in the hotel, and literally the trigger point for the breakup that day was that I took a nap instead of wanting to go out in the afternoon).

But let's move on. Devastated and shocked by the break-up (we had literally just signed a lease in NYC to live together at the point in which he announced the break-up), I immediately took to the apps. I was almost 32 and still believed I could find the one to start a family with, but knew I had to rush. I then went on a slew of dates with 4-5 different men over the next couple weeks.

Date 4 was with a guy we can call Nic, who was a self-employed, self-published author in marketing and psychology. Unlike the three men prior to him, Nic had caught my eye immediately on the app. He was incredibly handsome by male standards, with a perfectly sharp face, muscular build, and lovely well-groomed hair. This is a guy who no doubt any woman would be attracted to (the titular tall dark and handsome we often see in American media), and I was actually surprised when he somehow matched with me. We chatted in depth over the next couple days, talking fairly formally about our interest in our work, hobbies, and other topics. He seemed smart and serious, though it was only a couple days after I started texting him that I saw he had put on his profile that he didn't want children. By that point though we had already made some plans to meet, and I figured this guy was so handsome that it was worth at least getting to see him. 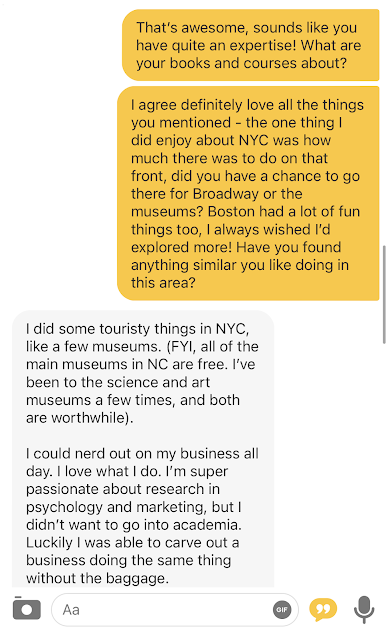 We met up at a Panera in the area (yes, not the most romantic of spots but that's suburban North Carolina for you). When I first saw him, I was immediately struck not by his looks (which were generally in-line with his photos, though maybe now his hairline was slightly more receding), but how nerdy and approachable he actually seemed in person. The photos had made him seem much more jock-like in his conventional attractiveness, so while he was certainly still handsome, I was glad to sense a nervousness that was endearing and made it easier for me (a sociable person) to take the lead on the conversation.

We had a really pleasant first conversation. It's always hard to tell with first dates, but it was certainly the best I've had from an app so far. Maybe because he was my exact physical type (actually, almost 100% for this reason), but he was also shockingly nerdy and sweet. I had expected an egotistical, cocky, full-of-himself bro based on his profile and self-proclaimed job and interests (I had in fact googled him and found his YouTube channel, which at 13K subs wasn't huge but certainly wasn't small). Of course, we can get into the issues later because yes they were indeed there. But from the first date he seemed genuine and serious, and we spent the time talking about our mutual interest in cooking with spices (he tried making his own Garam Masala which was quite impressive), cooking with herbs generally (he also tried growing herbs with one of those at-home herb garden sets), and other very domestic and soft topics. I talked about my job and feigned interest and excitement in it (in actuality I was quite miserable with my role but knew that most men expect and only want positivity, especially in a first date). He talked about how he loved his work and was able to carve out a role for himself, while I politely asked questions while pretending I hadn't already googled and found his website.

We left the Panera after a couple hours (this was in the middle of the day, as essentially we had squeezed a last minute coffee date during a Thursday) and he sent me a text, which I was slightly surprised and overall pleased to receive. One thing of note was that he was planning to leave town for a couple weeks to visit his family for the first time since the pandemic. I half-wondered if that was a lie, as it was strange for someone to make an excuse to leave and not see you for two weeks right upon meeting. But since it was a first date and there were no expectations I left it at that. His text was quite strangely forward, stating that he didn't believe the Panera parking lot was the right environment but that he was a direct person and wanted to be clear that he was interested in a romantic relationship, although he was also open to a platonic one. I responded that I was the same and that I also believed in being upfront. I did notice it took him about 6 hours to reply to my original text with a simple response, but didn't think too much of it.

Two weeks passed, during which I half expected I would never hear from him again. He sent a text about a week in mentioning he had tried to cook minestrone for his grandmother but tied the herbs with dental floss as he didn't have string. It was a cute note all in all, showing he remembered our conversation.

Finally, the day after my birthday (which was spent in a sad state of remembering my ex, as originally we had planned on me flying back to NYC to visit him that weekend), he texted me and asked to make plans for the Memorial Day Monday at a trivia brewpub. We met up at the place and ended up having another highly pleasant date. He spoke about his grandmother and how important she is to him. I had half thought he'd made up the trip as an excuse, but it became clear in this conversation that he indeed had visited family for at least part of it. We were awful at trivia, but it was a warm summer day and we thoroughly had fun - at one point before the trivia began I mentioned to him that trivia always featured music of the 70s and 80s. Moments later the announcer told us the category for that night was music of 1986, to which we cracked up. We did horribly (he chose the team name Hopefully Not Last, but unfortunately we did end up last) and while it normally takes a while for me to feel affection for people, I found myself drawn to him and playfully nudging his arm throughout it.

We ended the night in the parking lot and both said we had a great time. To my absolute shock, he then swooped in for a kiss. At this point, I'd never kissed any of the other guys I'd met on the apps and certainly hadn't expected it. It was also shockingly aggressive considering how sweet and innocent our date was - there was plenty of movement and teeth/tongue in it and I found myself backing away to the point where my purse slide off my shoulder.

On my drive home, I initially felt sickened by the kiss. It was far too aggressive which wasn't what I'd looked for and definitely wasn't good. I got home and an hour later he texted me about planning a date to try out curling, which I responded tepidly to and wondered if he meant weight lifting (he did not). That night though, strangely the more I thought about it the more I warmed up to the kiss and to our interactions. For the first time since my breakup, I completely forgot about my ex and found myself mulling over Nic and our connection. I guess the kiss ultimately worked despite my original revulsion - it got me to see him in a romantic light (and I'm someone who often can't see men in more than a platonic way, especially after only two dates). I became excited at the thought of seeing him again.

Let's leave off here for now, but I'll be writing some updates over the next couple days. Sadly, this story doesn't end well, but there's a lot of juicy (and frankly anger-inducing) details to come as we march to the here and now. So until next time!